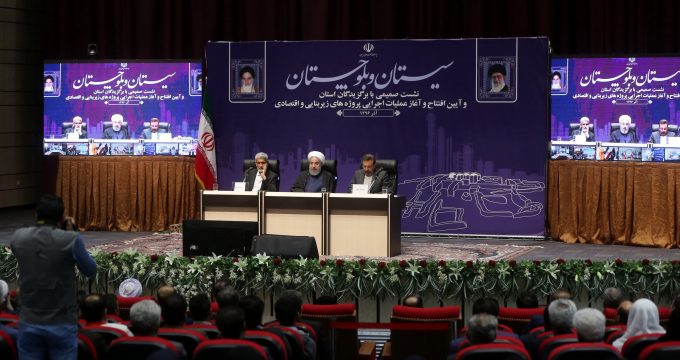 Chabahar to turn into a big business centre for region

Speaking on Saturday in a cordial meeting with elites of Sistan and Baluchistan province, President Hassan Rouhani said: “People’s participation is the key to economy’s dynamism and the government and nation must stand together”.

“In recent years while oil prices were declining sharply, countries of the region took money from their reserves but we deposited more to our development fund,” continued the President.

Being situated in borders is an opportunity for economic mobility, said Dr Rouhani, adding: “Investors should be encouraged to come and work more in the province”.

He also said: “The government and the people of Sistan and Baluchistan trust each other”, adding that the Makran coast will be developed a lot; we are looking for small nuclear power plants to produce electricity and freshwater.

Stressing that development must be accompanied by social, environmental and cultural issues, President Rouhani said: “The endogenous part of the economy means people’s participation, and its outward oriented part means foreign interaction, capital attraction and technology”.

Over the past 100 days, $23.1 billion finance agreements have been agreed with, he said, adding: “The capital and the participation of Iranians residing abroad should be used more for development”.

The president stressed: “We must strive to see growth and development in our country with the Iranian initiative, the capital of Iranians residing abroad and foreign capital”.

Dr Rouhani noted: “The government’s goal is to maintain inflation on a single digit, continue the economic growth of more than 5 per cent, and increase employment rates year-by-year. In doing so, we hope that by the end of the year 96, employment becomes higher than the average of the past years”.

In this meeting, three of the province’s top entrepreneurs presented their activities, suggestions and views for the further development of the province and further boom in their specialised fields.