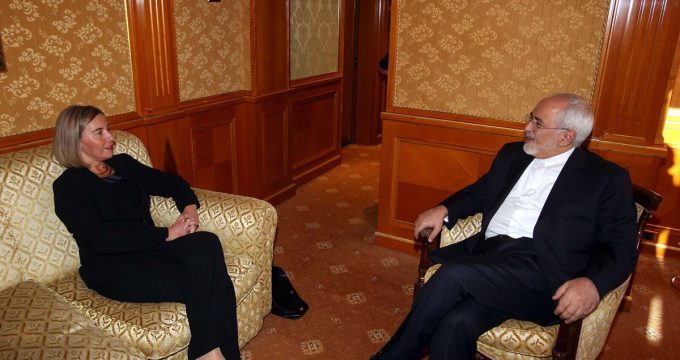 Zarif meetings in Rome on margins of Mediterranean Dialogue

While in Rome, Zarif addressed to a group of the Iranian nationals residing in Italy, held meetings with his Italian counterpart Angelino Alfano, EU Foreign Policy Chief Federica Mogherini as well as his Iraqi counterpart, Ibrahim al-Eshaiker al-Jaafari.

Addressing a group of the Iranian nationals residing in Italy, Zarif said the influence of the Islamic Republic of Iran in the region has roots in its right choices and not supporting the Al-Qaeda, Saddam Hussein, Daesh, Al-Nusra and the likes.

Zarif referred to Iran as a “country which its security, legitimacy, developments and advancements are all rooted from inside”.

Zarif, Alfano conferred on expansion of mutual relations and cooperation along with regional developments.

The two ministers reviewed various aspects of mutual relations and underlined further expansion of all-out cooperation between the two sides, expressing satisfaction over current level of political relations and stressed the need to increase economic cooperation with international organizations.

The Italian foreign minister, for his part, underlined full implementation of the 2015 nuclear deal officially known as the Joint Comprehensive Plan of Action (JCPOA).

Meanwhile, Zarif conferred with Mogherini on full implementation of the 2015 nuclear agreement

The two sides met behind closed doors about major regional developments mainly those in Lebanon and Syria.

Talking to al-Jaafari, Iranian FM congratulated Iraq’s victory of ISIL terrorists while the Iraqi side appreciated the supports provided by the Islamic Republic of Iran.

The two sides at the meeting also stressed the need to bolster collaborations especially in economic spheres in a bid to remove existing obstacles.

They also called for further cooperation in the fight against dust and sand storms.