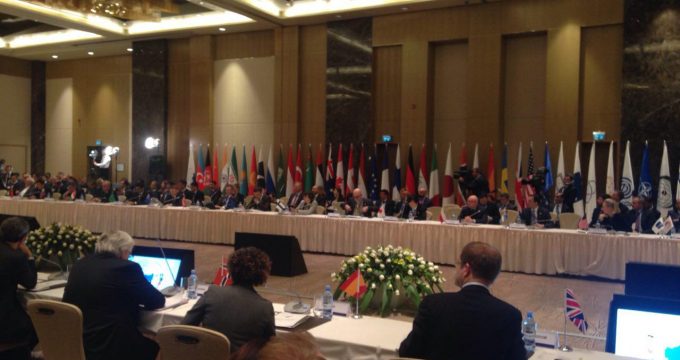 Press TV – At an international conference focusing on Afghanistan, Iran’s top diplomat urges attention to the growing presence of the Daesh Takfiri terror group in the Central Asian country.

“At the Heart of Asia summit, we laid emphasis on the need for attention to the Daesh phenomenon in Afghanistan, which is expanding these days,” Foreign Minister Mohammad Javad Zarif said on the sidelines of the conference in the Azeri capital of Baku on Friday.

“The summit is an effort to create common interests and cooperation, especially among regional countries, towards security and economic development of Afghanistan,” he added.

The conference was launched in 2011 to provide a platform for discussions on regional issues, particularly encouraging security, political, and economic cooperation among Afghanistan and its neighbors.

This year’s edition gathered 250 representatives from 40 countries and international organizations.

Zarif further said the Afghan conflict does not have a military solution, adding that if there are no comprehensive strategies in the area, the achievement of lasting peace would be impossible.

“Afghanistan has made positive achievements in various areas, but it has [also] been faced with foreign invasion and the threat of Daesh,” the Iranian top diplomat said, and asserted, “Prevention of this threat is possible through common endeavor by all the regional countries.”

The terrorist outfit, which has become notorious for its brutality worldwide, began establishing a notable presence in Afghanistan almost a year after making sweeping land grabs in Iraq and Syria in 2014.

It has mostly been populating the eastern province of Nangarhar, from where it has carried out high-profile brutal attacks against major population centers in the Central Asian country.

Former Afghan president, Hamid Karzai, said last month that the United States — which has been maintaining military presence in Afghanistan since 2001 — was colluding with Daesh there and allowing the Takfiri group to flourish in the war-stricken country.

December 1, 2017
Rouhani calls for immediate relief to quake-hit people of Kerman
Iran says murder of its national by US police under investigation