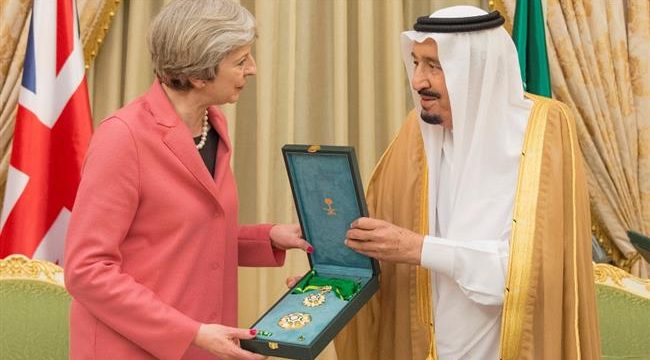 Press TV – British Prime Minister Theresa May has reportedly called on Saudi Arabia to ease a cruel blockade on its war-torn neighbor, Yemen, in order to “avert a humanitarian catastrophe” there.

May made the appeal as she met with King Salman and Crown Prince Mohammed bin Salman on Wednesday night during a visit to Riyadh, her office said in a statement issued on Thursday.

“The prime minister made clear that the flow of commercial supplies… must be resumed if we are to avert a humanitarian catastrophe,” May’s office said.

“They agreed that steps needed to be taken as a matter of urgency to address this.”

The UK, along with the US, has been among the major supporters of the Riyadh-led coalition of countries, which has been involved in a bloody military campaign against Yemen since early 2015.

May has been under fire by opposition figures and leading human rights groups at home and abroad for refusing to suspend British arms sales to Saudi Arabia amid the war on Yemen, which has reportedly led to over 12,000 civilian deaths to this day.

Since March 2015, when the war on Yemen began, Britain has signed off more than £3.3 billion ($4.4 billion/3.7 billion euros) worth of arms sales to Saudi Arabia.

Britain’s sales of military equipment to Saudi Arabia hit £1.1 billion in the first six months of this year, according to the latest British government data. London has become Riyadh’s largest trading partner in the Middle East.

In September, a report by UK-based War Child revealed that British arms companies including BAE systems and Raytheon have earned revenues of more than $8 billion from dealings with Saudi Arabia since the onset of the war on Yemen, generating profits estimated at almost $775 million.

Saudi Arabia has been incessantly pounding Yemen in an attempt to crush the Houthi Ansarullah movement and reinstate former President Abd Rabbuh Mansur Hadi, who is a staunch ally of the Riyadh regime.

Thousands of civilians have died in bombing raids and around one million children are facing starvation and serious illness as a result of the conflict.

Following urgent calls for lifting the blockade, the Saudi-led coalition announced on Wednesday the reopening of the Hudaydah port and the Sana’a airport for humanitarian aid. But only a few ships have docked at Hudaydah and the nearby port of Salif since the blockade was eased.

The United Nations says Yemen is experiencing “the worst humanitarian crisis on the planet.”

On Monday, the UN called on the Saudi-led coalition to do “much more” to ease the brutal blockade on Yemen.

UN officials have warned that Yemen faces the risk of the “world’s worst famine in many decades,” saying 95 out of 320 districts in Yemen were in a very difficult food situation.