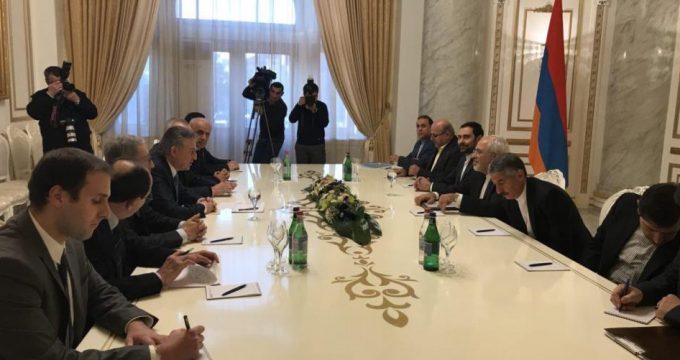 Iranian companies to benefit from EEU through Armenia

“As the trend of imports and exports between Iran and Armenia is growing we are ready to pave the way for Iranian companies wishing to have a share in the Eurasian Economic Union (EAEU),” said Armenian Prime Minister Karen Karapetyan during his Tuesday meeting with visiting Iranian Foreign Minister, Mohammad Javad Zarif in Yerevan.

Iranian Foreign Minister Mohammad Javad Zarif, who is in Yerevan at the official invitation of his Armenian counterpart, held a meeting with Armenian FM Eduard Nalbandyan, just before meeting with the Armenian premier.

“We attach great importance to our relations with the Islamic Republic of Iran and we are eager to expand bilateral cooperation in areas of economy, energy, and free trade zones,” highlighted the head of Armenian government.

The Iranian top diplomat, for his part in this meeting, extended gratitude to Armenian officials who sent messages of sympathies upon the occurrence of the deadly earthquake of November 12 in western Iran.

“Economic relations between the two countries should be lifted higher than ever while the Free Trade Zones can pave the way for this cause,” asserted the Iranian top diplomat.

Foreign Minister Zarif referred to the delegation of business representatives accompanying him and said, “The companies present at the trade meeting are the best of their fields and quite ready to boost the two-way trade between Iran and Armenia.”

Zarif who is in Yerevan at the head of a high-ranking political and economic delegation is also slated to hold talks with Prime Minister Karen Karapetyan and President Serzh Sargsyan.