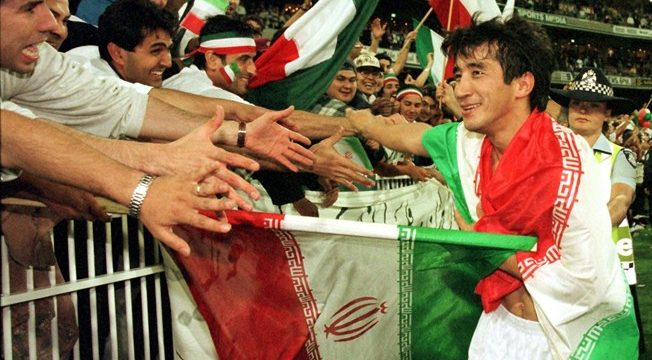 FIFA.Com: Iran, boasting perhaps their greatest-ever side, had a mountain to climb to reach the 1998 FIFA World Cup France™. Having drawn 1-1 with Australia in the first leg of their qualification play-off in Tehran, they trailed 2-0 in Melbourne with less than 20 minutes remaining.

Team Melli fans yearned for the iconic Ali Daei to come to their rescue, and though they improbably secured the 2-2 draw that sent them through on away goals, on this occasion the hero’s cape was reserved for the towering forward’s diminutive sidekick. Khodadad Azizi, indeed, set up Karim Bagheri to reduce the deficit on 71 minutes, before silencing the vast majority of the 85,000-plus fans with 75th-minute equaliser.

“The goal I scored against Australia was the most memorable of my career,” Azizi, who netted 11 times in 47 games for Iran between 1992 and 2005, told FIFA.com. “Not only because the goal was important for us, but also because of what was at stake.”

And that, a place at France 1998, looked to be something Iran were cruising towards with just three rounds remaining in the Asian Zone preliminaries. They held a four-point lead over both Saudi Arabia and China PR, but somehow collected just one point from their last three outings and consequently watched the Saudis pip them to the region’s solitary automatic qualifying place.

The goal I scored against Australia was the most memorable of my career. We didn’t lose hope even when we were two goals down, and our efforts eventually paid off.

Iran’s next opportunity to seize a ticket to the world finals came in their AFC play-off against Japan, but despite coach Mohammed Kohan having been replaced by Valdir Vierra, Team Melli lost 3-2 to the East Asians. Their third and final chance came in the two-legged AFC/OFC play-off, against a side stacked with European-based players and guided by former England manager Terry Venables.

The teams shared two goals over the first 90 minutes in Iran, with Azizi cancelling out Harry Kewell’s opener, before the then 26-year-old slotted past goalkeeper Mark Bosnich to complete an heroic comeback at the Melbourne Cricket Ground.

“Ali Daei made the perfect assist, which allowed me to run one-on-one with the goalkeeper,” recalled Azizi, savouring the moment that etched his name into Iranian football folklore. “We didn’t lose hope even when we were two goals down, and our efforts eventually paid off.”

It was not, however, the very first time Azizi shone on the international scene. He first made his mark in the AFC Asian Cup 1996, during which he was crowned the tournament’s Most Valuable Player as Iran finished third – an achievement that helped him earn that year’s AFC Player of the Year Award.

At the club level, after playing for domestic giants FC Tehran and Persepolis, he signed for Cologne in 1997, joining Daei and Bagheri among the Iranian trailblazers in the Germany Bundesliga. He went on to have a one-year spell with San Jose Earthquakes in the USA, and he still remains the only Iranian to have played in Major League Soccer.

After hanging up his boots four years ago, he embarked on a coaching career, leading his hometown team Aboomoslem before working as a technical advisor to a couple of Iranian clubs, including Sanat Naft, his current employers.

Azizi was understandably disappointed that Team Melli failed to qualify for South Africa 2010, but he believes the future is bright for his country. “Our people love football and we are never short of talented players,” he said. “But we have to employ a long-term development plan and maintain the consistency at the organisational level for future success.”