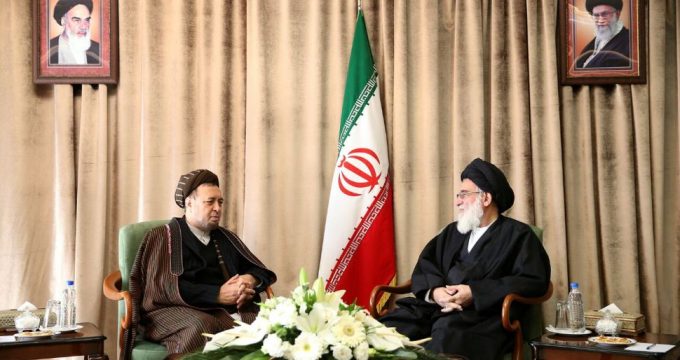 IRNA – Chairman of Iran’s Expediency Council described the unity between Shia and Sunni Muslims as essential in foiling conspiracies against Muslims and oppressed people.

Afghans are oppressed and they have had many martyrs, Ayatollah Mahmoud Hashemi Shahroudi said on Monday in a meeting with Second Vice-Executive Chief of Afghanistan government Mohammad Mohaqeq.

He also appreciated Muslim Afghans’ efforts in annihilating bases of Daesh terrorists in Iraq and Syria.

‘Penetration of US among Muslims is one of the most important threats for Afghanistan since US aims to implement its sinister and divisive plots in Islamic countries like Iraq and Afghanistan,’ he added.

‘Enjoying the same language and also having common border are very effective for Iran to support economic and cultural development in Afghanistan,’ Shahroudi said highlighting increased economic cooperation between Iranian and Afghan businessmen.

‘Daesh has designed a sinister plot to create conflict and massacre in Afghanistan,’ he said.

He also expressed hope for Afghans’ awareness to result in full defeat of US threats in the country.