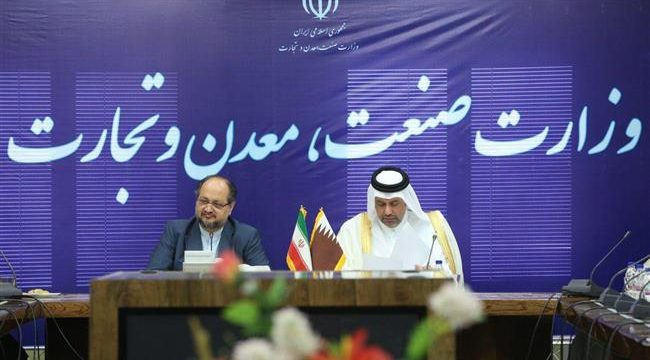 November 28, The Iran Project – Qatari Minister of Economy Ahmed bin Jassim Al Thani traveled to Iran on Saturday (Nov 25) to review issues of mutual interests with the Iranian side.

While in Tehran, Al Thani held talks with Iranian Foreign Minister Mohammad Javad Zarif, Minister of Industry, Mine and Trade Mohammad Shariatmadari and attended a trilateral meeting in presence of his Turkish counterpart Nihat Zeybekci.

In a meeting, Zarif and the Qatari minister reviewed ways to develop economic and trade relations and the latest condition of economic ties between Iran and Qatar.

Talking to Qatari minister, Shariatmadari announced Doha’s proposal to achieve the target of five billion dollars of exchanges with Tehran, saying that for the time being, the figure is less than one billion dollars.

He further noted that given the specific conditions facing the region, Qatar is now interested to boost all-out ties with Iran more than any other time.

Qatari economy minister, for his part, said that Iran plays a crucial role in transiting goods from other countries such as Turkey and Azerbaijan Republic.

He also said that during the meeting, it was agreed to raise volume of commercial exchanges between Iran and Qatar and remove all the obstacles in the way of boosting ties.

The Qatari official also said that Iran-Qatar trade exchanges have grown remarkably as Iran’s foodstuff and construction materials’ export to the country has increased.

Meanwhile, Iran, Turkey and Qatar on Sunday (Nov 26) signed a transportation pact for boosting trade among the three countries in a meeting attended by Zeybekci and Al Thani and Shariatmadari.

Under the agreement, Iran will be the transit country between Turkey and Qatar. The deal is expected to help accelerate commodity delivery and facilitate trilateral trade, Anadolu Agency reported.

The agreement will lead to the creation of a joint working group to facilitate the transit of goods between the three countries.