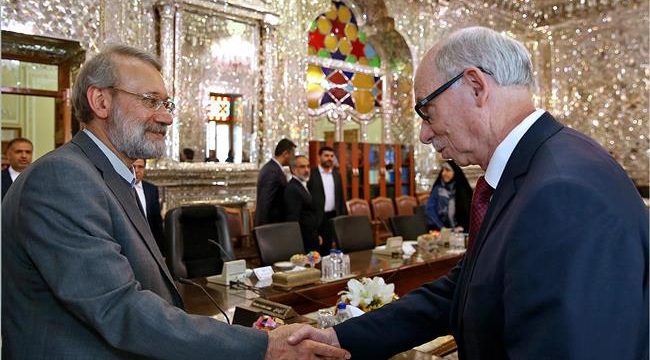 Press TV – Iranian Parliament Speaker Ali Larijani says the Islamic Republic’s diplomacy is based on solving conflicts through dialogue and negotiation, criticizing US attempts to hinder the implementation of the 2015 multilateral nuclear agreement.

Larijani made the remarks in a Sunday meeting in Tehran with Janusz Lewandowski, a member of the European Parliament and chairman of the delegation for relations with Iran, in reference to the landmark nuclear agreement, known as the Joint Comprehensive Plan of Action, signed between Iran and the P5+1 group of countries.

“Iran is committed to the JCPOA and baseless accusations leveled by the US and some of its allies in the region should not be allowed to prevent the implementation of the agreement,” he said.

The European Parliament can benefit from the JCPOA implementation and help increase economic cooperation with Iran by removing the existing obstacles, the Iranian parliament speaker noted.

Larijani added that US President Donald Trump was making comments against Iran on a daily basis with the purpose of convincing other countries not to boost their relations with Tehran; while at the same time, he rewarded state sponsors of terrorism.

Trump delivered an anti-Iran speech on October 13, in which he said that he would not continue to certify Iran’s compliance with the terms of the JCPOA, reached under his predecessor, Barack Obama, and warned that he might ultimately terminate the agreement.

The US Congress was then given 60 days to decide whether to reimpose economic sanctions on Tehran that were lifted under the nuclear accord.

The top Iranian parliamentarian urged international determination to eliminate terrorism and said, “Unfortunately, some countries are supporting terrorists and providing them with weapons while issuing statements that they oppose terrorism.”

Larijani emphasized that those who had created the Taliban formed the Daesh Takfiri terrorist group as well.

Lewandowski, for his part, said he carried good messages from the European Union for Iran, adding that the bloc would remain committed to the nuclear accord regardless of the US president’s decisions.

He also stressed the importance of establishing stability in the region, saying that Iran played a leading role in this regard, because it had made great efforts in the fight against the Daesh terrorist group.