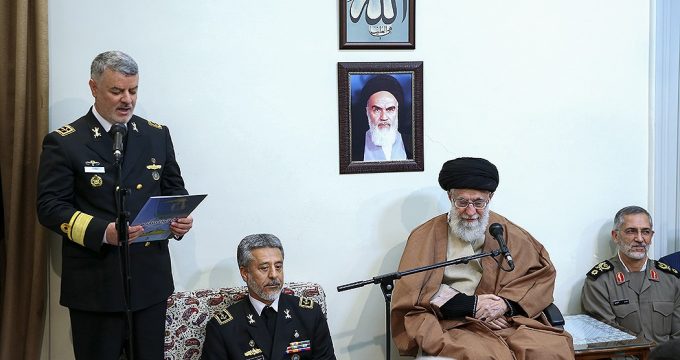 Leader of the Islamic Revolution Ayatollah Seyyed Ali Khamenei has called on the Iranian naval forces to continue their strong presence in international waters.

There is no obstacle to strengthening Tehran-Yerevan ties, visiting Iranian Foreign Minister Mohammad Javad Zarif said in the Armenian capital on Tuesday.

Former Iranian judge and prosecutor Saeed Mortazavi was sentenced to two years in prison, said the plaintiff in his prosecution.

The Indian Ocean Naval Symposium Multilateral Maritime Search and Rescue Exercise-2017 (IMMSAREX-17) started in the Bay of Bengal on Monday and the Iranian Navy’s 49th flotilla of warships is among those taking part in the drills.

In a message to commemorate the National Navy Day on Nov. 28, Iranian President Hassan Rouhani lauded the Navy for its outstanding role in safeguarding the country and contributing to its might in international waters.

Official: No change in Iran-Total contract

Iranian Deputy Industry, Mine and trade Minister Mansour Moazami said that the foreign investors have not quit investing in Iran, and dismissed any change in the country’s contract with giant energy firm, Total.

Iran’s Foreign Minister Mohammad Javad Zarif and his Armenian counterpart Eduard Nalbandyan have discussed issues of mutual interest in a meeting in Yerevan.

Chief of Staff of the Iranian Armed Forces said the strategy of close interaction between the naval forces of the Army and the Islamic Revolution Guards Corps (IRGC) has thwarted the plots of “arrogant powers and adventurists” in the Persian Gulf region.

China, Kazakhstan, Turkmenistan and Iran have signed an agreement to increase the volume of cargoes shipped through the four countries to international markets by rail.