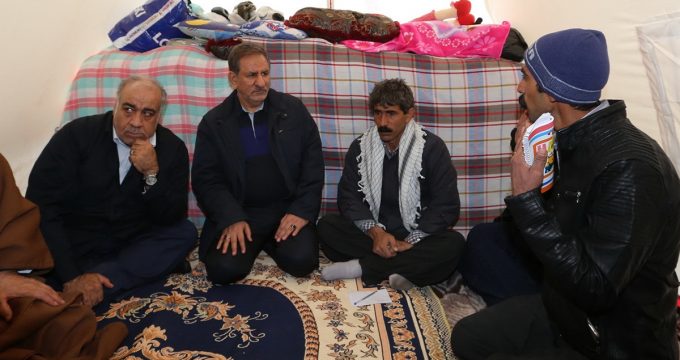 Efforts to help people and to accommodate them are subject to increase, Jahangiri said referring to measures which have been taken by government and rescue teams for the last two weeks.

He also expressed hope for preparing houses for quake-stricken people and also for resuming jobs in stricken areas.

Jahangiri heading a delegation arrived in Kermanshah, western Iran on Monday to visit the quake-stricken areas.

The visit aims to investigate how the rescue and relief operations are going on and to solve the problems of quake-hit people.

Jahangiri is also scheduled to attend the Kermanshah Crisis Management Committee meeting to make the necessary decisions to solve problems and to accelerate the process of reconstructing damaged areas.

A 7.3-magnitude earthquake hit Kermanshah Province in west of Iran on November 12, killing over 483 and wounding 12,386 people.

The massive jolt, which also rocked other western provinces of Iran and areas in eastern Iraq, was also felt as far as Persian Gulf states of Qatar and Kuwait in the south, the Occupied Palestine in the west, and Turkey in the north of the quake-stricken areas of Iran and Iraq.