RT– Syrian Kurdish militias will feel betrayed and will likely align closer with Damascus, if Donald Trump indeed delivers on his promise to Recep Tayyip Erdogan and “adjusts” US military support for the so-called Syrian Democratic Forces, experts have told RT.

In a phone call with his Turkish counterpart Friday, Trump briefed Erdogan on “pending adjustments for [US] military support provided to our partners on the ground in Syria.” Turkish Foreign Minister, Mevlut Cavusoglu, who was present during the call, said Trump explicitly promised to “not provide weapons to the YPG,” which Ankara considers a terrorist organization affiliated with the Turkish Kurdistan Workers’ Party (PKK).

But without support from Washington, Kurds are likely to seek closer ties with Damascus to resolve the Syria crisis and retain the country’s unity, investigative journalist, Rick Sterling told RT.

“What may happen, is that they may recognize and start working more closely with the Syrian government. Of course, they have never been fighting against the Syrian government forces. And I think what may happen here is that YPG will align and make it very clear that they are not seeking a federation or anything like that but they will be part of a future Syria,” Sterling said.

Trump’s intention to backtrack on his support for the Kurds, experts believe, is part of an attempt to “adjust” failing US policy on Syria, following a number of recent diplomatic markers, achieved with Russia’s direct and dynamic input. Earlier this week, Russian President Vladimir Putin hosted Syrian leader Bashar Assad in Sochi. He later convened a summit on the future of Syria with the leaders of Iran and Turkey, where all parties endorsed an initiative to convene an all-Syrian national dialogue. The developments in Syria were also discussed between Putin and Trump Tuesday, during a more than an hour-long phone conversation.

“What is happening in Syria involves basically a failure of US foreign policy. What I mean is that Washington had allied with the Saudis regarding backing religious zealots. However, with the intervention of Russia, and Iran, and Hezbollah of Lebanon, these forces defeated the so-called Islamic State, defeated the religious zealots and therefore US policy is now scrambling to try to find an alternative to that failed policy,” historian Gerald Horne explained.

“The timing [of Trump-Erdogan phone call] is being driven by Russia’s role in seeking a solution and really making a lot of progress in resolving the conflict, bringing different parties together to the table,” Sterling pointed out.

Sterling warned that some forces in Washington do not want peace to prevail in Syria. Furthermore, there is a chance that Washington might ally itself with Ankara’s troops in Syria, who are officially on the ground there to monitor the Idlib de-escalation zone, one of four established by Moscow, Ankara, and Tehran earlier this year. Erdogan, however, made little secret of the fact that Turkish forces might challenge the Kurdish stronghold of Afrin in northern Syria. 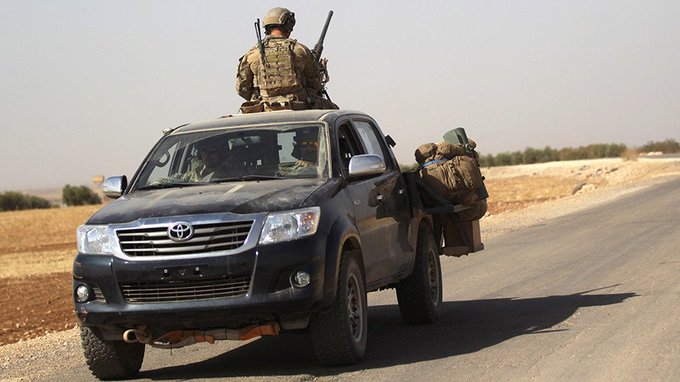 “There has been a lot of Turkish troops going into Northern Syria, so it may be that Washington will align more closely with Turkish troops which will refuse to leave Syria,” Sterling said. “I think what is going on in Washington is that there is uncertainty how to handle the situation. There are forces in Washington that want to play a spoiler in this [achieving peace]. They don’t want to see a resolution to the conflict, and that is what is dangerous.”

Washington’s decision to back away from the YPG, which has been the core of the US-led Syrian Democratic Forces (SDF), is nothing less of a “betrayal,” experts told RT.

“The Kurds have been betrayed many times in the past,” Sterling said. “They will not be surprised by this. And they have probably been making plans for some time that their patron, the United States, will abandon them.”

“The Kurds are in a corner” following the Iraqi Kurdistan independence referendum in September, which regional powers and the US failed to recognize, Horne said. “If the Kurds are getting a raw deal, this will not be the first time they have been traduced at the hands of Washington,” he added. He noted that following the Erdogan-Trump call, the “Kurds are really over a barrel.”