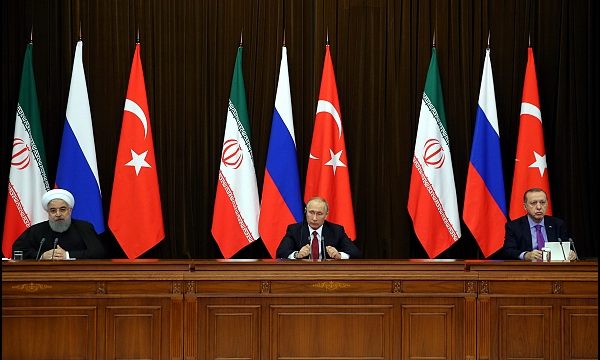 Iran, Turkey, Russia cooperation sends strong message to the US

MNA – Referring to possibility of revising the NATO membership by Turkey, Dr. Bora Bayraktar says the recent cooperation between Iran, Turkey and Russia despite differences sends strong message not only to US but also to the world.

After recent meeting between foreign ministers of Iran, Turkey and Russia in Antalya, the leaders of the three countries are set to meet at a crucial presidential summit in Sochi on Nov. 22 to discuss the political future of Syria, amid hope that the civil war is coming to an end and victory against jihadist groups is imminent.

To shed more light on the issue and the current differences between Turkey and its old allies , the US and NATO, Payman Yazdani from Mehr News agency reached out to Dr. Bora Bayraktar,Assistant Professor of Istanbul Kultur University.

Following is the full text of the interview with him:

Despite differences between Iran, Turkey and Russia over some issues in the region, recently we are witnessing very close cooperation between these three countries in Syria, Iraq and Iraqi Kurdistan. What makes these cooperation significant for these countries?

I think the basis of cooperation among these countries due to the common understanding that there is existential threat against them. And the epicenter of these threats are in Syria and Iraq. This is more valid for Turkey and Iran. Both countries feel that after Syria and Iraq, next target will be Turkey and Iran. In the Western media this existential concerns of survival is labeled as “paranoia” of Erdogan or Turkey or Iran, making them as if they were some kind of illness, and there is no basis for it. In fact, in our national memories, we know that Turkey and Iran were targeted in the past, tried to be occupied. There were times of military coups or attempts of regime change directed from Western capitals. Although there are some disagreements between Iran and Turkey on some issues, when it comes to survival, keeping territorial integrity of themselves and neighbors, the two can come together and form an effective alliance. Russia also feels threatened by the US and some other Western powers, understands the importance and capacity of Turkey and Iran and tries to counter balance others.

Does this cooperation sends any message to US for post-ISIL era in the region?

I think this cooperation, especially between Iran and Turkey, during the Iraq referendum crisis was a strong message not only to US but also to the whole world as well. Germany stopped training Peshmerga, soon after Turkish-Iranian and Iraqi cooperation. The US and other European countries just watched the developments with weak statements. Israel downgraded its pro-Kurdish rhetoric. It seems that the original Post ISIL scenario was based on Kurdish sovereignty in North belt of Syria and Iraq. It is already dead after Iraqi operations in Kirkuk and its north, after Turkish-Iranian moves to contain KRG. The attempts to weaken Syria and Iraq territorial integrity will continue, especially in North of Syria, but the rising cost of this project may force the US and its allies to review their position. I believe a viable solution to these problems can only come within the region.  No country has the power to impose their will in the Middle East but Iran and Turkey has the power to spoil any attempt that they don’t want to see.

How successful have been the US and some its European and regional allies policy that aimed to disintegrate the region especially Iraq and Syria to their own interest?

After 6 years of war in Syria, and 14 after Iraq invasion of the US, territorial integrity, state structures of Syria and Iraq have been harmed terribly. The economies collapsed and social life has been destroyed. Seeds of hatred planted among different ethnic and sectarian groups. But still we can talk about Iraq and Syria. During the Kurdish independence referendum we witnessed a stronger position in favor of Iraqi unity among Iraqi people. Regardless of their different ethnic and religious differences many Iraqis fought for their country. This shows us there is still hope for these countries. The disintegration attempts were strong, the civil war was ruthless, but people learned a lot from their grief.

considering the tensions between US,  NATO and Turkey over different issues such as their support to some terrorist groups like PKK and, buying S 400 missile system, and identifying Erdogan and Ataturk as enemy in NATO drills in Norway, How serious do you see the problem of Trust between Turkey and its old allies? How do you see the future of their relation and cooperation?

This is a big crisis from Turkish point of view and it shows that the problem for US and some European countries is not the personality of Turkish President Erdogan. It is Turkey itself. Putting Kemal Ataturk, founder of Turkey as a target shows the anti-Turkey climate in NATO Headquarters. This move requires more than the daring of a single official. Turkish people are aware of that. The trust between the two sides is getting weaker and weaker. Many people now question the logic behind Turkey’s membership in Atlantic Pact.  Even people close to the government, officials, and intellectuals now consider the implications of a leave from NATO. This is not the first crisis between Turkey and NATO.