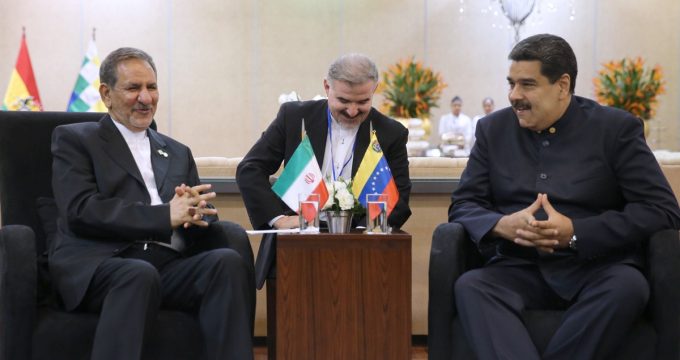 IRNA – First Vice President Eshaq Jahangiri on Friday voiced Iran’s readiness to share its experience with different countries during meetings with the senior officials from Equatorial Guinea, Venezuela, Bolivia and Libya on the sidelines of the Fourth Gas Exporting Countries Forum (GECF).

He also underlined failure of the policies leading to extremism.

In a meeting with President of Equatorial Guinea Teodoro Obiang, Jahangiri stressed the need for promoting cooperation between the two countries within the GECF framework.

Noting that Iran and Guinea boast of numerous potentials, in addition to gas, for promoting relations, the Iranian official said that Tehran welcomes to host the next round of the GECF.

Iran as the biggest holder of the gas reserves is prepared to share its experience in the industrial and scientific spheres with the Equatorial Guinea, he said.

Exchanging formal delegations for identifying areas of cooperation can help bolster bilateral relations, Jahangiri said, noting that Iran is ready to contribute to its development.

Meanwhile, President Obiang, for his part, said that Iran played a crucial role in advancing objectives of the organizations since its establishment 15 years ago.

He added that the two countries can further bolster relations at the bilateral, regional and international levels by relying on potentials such as gas.

African states are in need of support by the revolutionary countries including Iran to counter hegemony of imperialism, the Guinean president said, calling for a win-win relations with Iran in line with the two nations’ interests.

In a separate meeting with the Venezuelan President Nicolas Maduro, The Iranian first vice president hailed positive and constructive ties between Iran and Venezuela, underlining the need for further development of Tehran-Caracas in all fields.

Commenting on regional situation and US antagonistic policies against independent states, Jahangiri said that all independent and freedom-seeking countries should work for promotion of multilateralism across the world.

US unilateral sanctions targeted independent states and positive result of US behavior towards Iran was the latter’s reliance on its domestic capabilities and boosting national production capacity to meet its needs, Jahangiri said.

Maduro, for his part, conveyed his warm greetings to Supreme Leader of the Islamic Revolution and called for expanding relations with Iran in various fields.

Condemning White House’s sanctions and pressures on his respective country, he said that such policies are doomed.

He also appreciated Iran for its stance in line with establishing stability in the region and supporting Venezuela.

Meanwhile, in another meeting with Bolivian President Evo Morales, Jahangiri referred to high level of political relations between Iran and Bolivia, stressing the need for enhancing economic ties between the two nations.

Reiterating the need for removing banking obstacles in the way of promoting relations, he said that it is necessary for Bolivia to serious pursue solving banking problems.

For his part, Morales said that the two countries should explore avenues for promoting bilateral ties through ambassadors and ministers.

Referring to his respective country’s need for modern technologies and science, he called for using Iran’s experience in various domains.

Noting that Libya is a big and significant country in the Islamic world and Africa, Jahangiri hoped that the country will exit the crisis through efforts of the nation and chiefs of the tribes.

Given the valuable history and civilization, Libyans can cope with solving their problems and play their role in today’s world, he said.

The Libyan foreign minister said for his part that his respective country is willing to broaden ties with Iran.