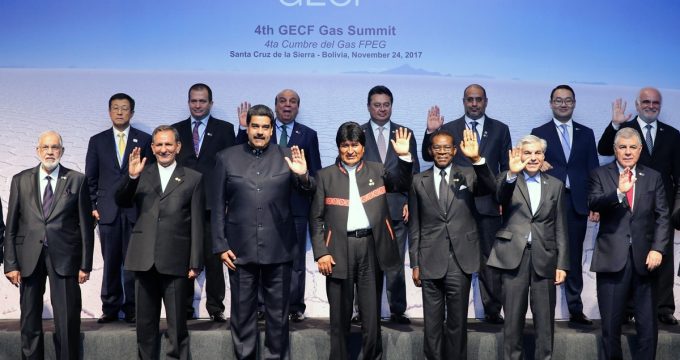 Press TV- Gas exporting countries have condemned the use of sanctions as a weapon against other nations, in an apparent jab at the United States.

The Gas Exporting Countries Forum, which has 12 members in the likes of Iran, Russia and Qatar, issued a communiqué at the end of their summit in Bolivia on Friday.

Some members of the group such Russia, Iran and Venezuela have been slapped with unilateral economic sanctions by the United States which is widely believed to be waging an energy war in line with its global domination plans.

In their statement, the Gas Exporting Countries Forum expressed “profound concern” about sanctions that are not authorized by the United Nations.

Russian Energy Minister Alexander Novak said countries should not let the United States impose such sanctions without a vote of the United Nations Security Council.

Russia, as the world’s second biggest gas producer after the US, depends on its vast artery of pipelines to transfer gas to Europe.

Washington has also imposed an embargo on Venezuelan gas and oil and threatened to reimpose the sanctions which were lifted on Iran under a 2015 international nuclear agreement.

In the global market, increased output from US shale producers has been a major bug-bear for other oil and gas producers, sending natural gas prices into a tailspin.

Gas prices have slumped more than 80% over the past decade amid a supply glut as US advances in directional drilling and hydraulic fracturing has made the United States the world’s No. 1 producer of natural gas.

On Friday, Novak said the oversupply on the world market could trigger a “crisis” drop in prices, similar to what occurred in the crude oil market, Reuters reported.

The GECF communique said its members agreed to cooperate towards a sustainable global natural gas market, while promoting the fuel’s use.

However, there was no indication how the group planned to confront the US and its subversive ways.

US energy consultants have cited natural gas as “a great tool” to clip the wings of Russia, Iran, China and “other hostile nations” and exert power over allies at the same time.

US shale oil is already weighing down on the country’s allies in the Persian Gulf, especially Saudi Arabia which is hard pressed for oil revenues because of its war in Yemen and other expenses.

Meanwhile, global demand is rising across the world for natural gas being viewed the big fuel of the next two decades. Gas consumption is on track to hit almost 4,000 billion cubic meters by 2022 and China is projected to account for almost 40 percent of growth.

According to US military analyst James “Spider” Marks, “as we produce more of our own gas, we reduce our dependence on foreign sources of energy. Second, as our production grows, so does our ability to advance our interests abroad through exports.”

“This provides America unprecedented global flexibility, to engage internationally at a time and place of our choosing,” said Marks who has led many business ventures since retirement from the Army where he spent over 30 years.

The US is on course to challenge Qatar and Australia as the highest exporters of liquefied natural gas (LNG) by 2022, according the International Energy Agency (IEA).

“By maximizing its natural gas production and getting this gas to market efficiently and reliably, the United States can accomplish two goals. It can reduce its dependence on foreign energy while increasing its influence in global affairs at the expense of Russia and China,” Marks said in July.

“If we add to the global supply by increasing our exports, we further weaken Russia and China while strengthening our own alliances,” he wrote on the website of Washington-based Morning Consult company.