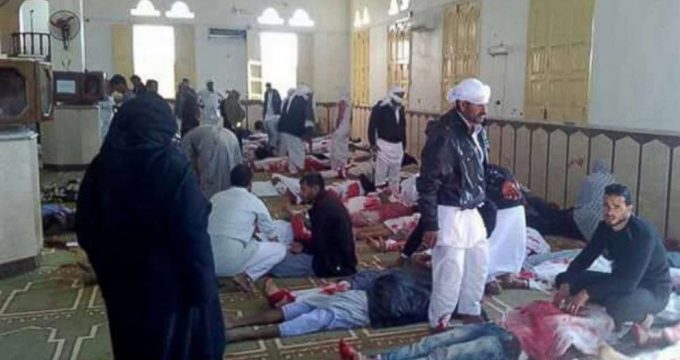 At least 235 killed in ‘horrific’ attack at Egypt mosque

ABC News– At least 235 people were killed and 130 more injured in an attack at a mosque during Friday prayers in northern Sinai in Egypt, according to Egyptian state news agency MENA.

A Sinai-based reporter told ABC News that the casualties included children and elders.

An eyewitness described the perpetrators as having stationed themselves at the mosque’s three exits and deliberately attacking those who tried to escape the building, as well as passing vehicles, after first shooting some who were “kneeling in prayer.”

“The sight was horrific,” the witness, Ibrahim Shetewy, told ABC News in Arabic, adding, “We carried whoever we found alive and took them in pickups and private cars until more ambulances could come and help.”

Shetewy described the mosque in question as one frequented by travelers on their way in and out of the area. He said the building is “huge” and was lined with bodies and a large quantity of shell casings following the attack.

“There was a woman waiting outside for her husband and young child to finish praying; she came inside and found them dead next to each other,” Shetewy said.

He added that people are lined up at a local hospital to donate blood.

An additional local resident present at the Beir El-Abd hospital, which received victims in the aftermath, described the wounded arriving at a rate beyond the capacity of the hospital, which is between 25 to 30 miles away from the targeted mosque. The resident added that urgent cases are being sent to another hospital in Ismailia, almost 75 miles away.

U.S. President Donald Trump commented on the attack via Twitter Friday morning, writing that it was a “horrible and cowardly terrorist attack on innocent and defenseless worshipers.”

“The world cannot tolerate terrorism, we must defeat them militarily and discredit the extremist ideology that forms the basis of their existence!” he continued.

Horrible and cowardly terrorist attack on innocent and defenseless worshipers in Egypt. The world cannot tolerate terrorism, we must defeat them militarily and discredit the extremist ideology that forms the basis of their existence!

Two photographs taken after the attack each show more than a dozen bloodstained bodies lined up on the ground of a building as those who appear uninjured tend to them. 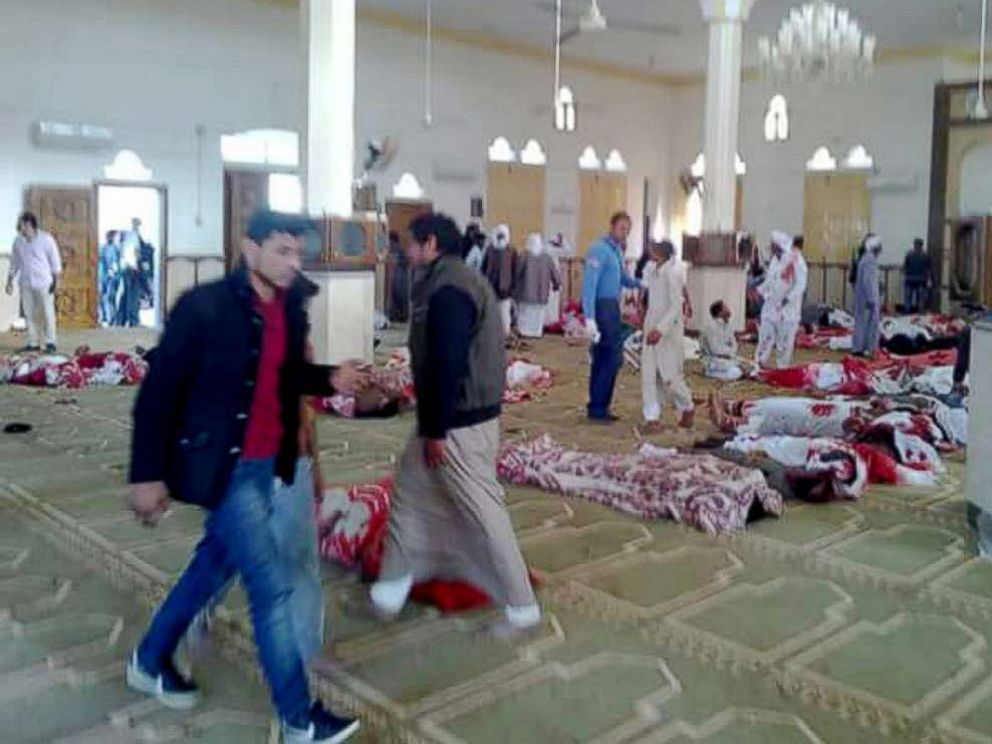 People stand over bodies of worshipers killed in attack on mosque in the northern city of Arish, Sinai Peninsula, Egypt, Nov. 24, 2017.