A Look at Iranian Newspaper Front Pages on November 23

Iran Front Page- IFP has taken a look at the front pages of Iranian newspapers on Thursday, November 23, and picked headlines from 13 of them. IFP has simply translated the headlines and does not vouch for their accuracy.

The top story in all Iranian newspapers today was the remarks made by the Leader of Iran’s Islamic Revolution Ayatollah Seyyed Ali Khamenei in a meeting with a group of Basij (voluntary) forces in Tehran. The Leader talked about the eradication of ISIS terrorist group in Syria and Iraq, stressing that it has brought the US to its knees.

The return of Lebanese Prime Minister Saad al-Hariri to Beirut and his decision to postpone his resignation after holding talks with President Michel Aoun was another top story in today’s papers.

1- Iran Leader: Young Believers Brought US to Its Knees by Eradicating ISIS

2- Rouhani: Future of Syria Not to Be in Hands of Foreign Forces

4- Erdogan: No One Can Prevent Us from Achieving Nuclear Energy 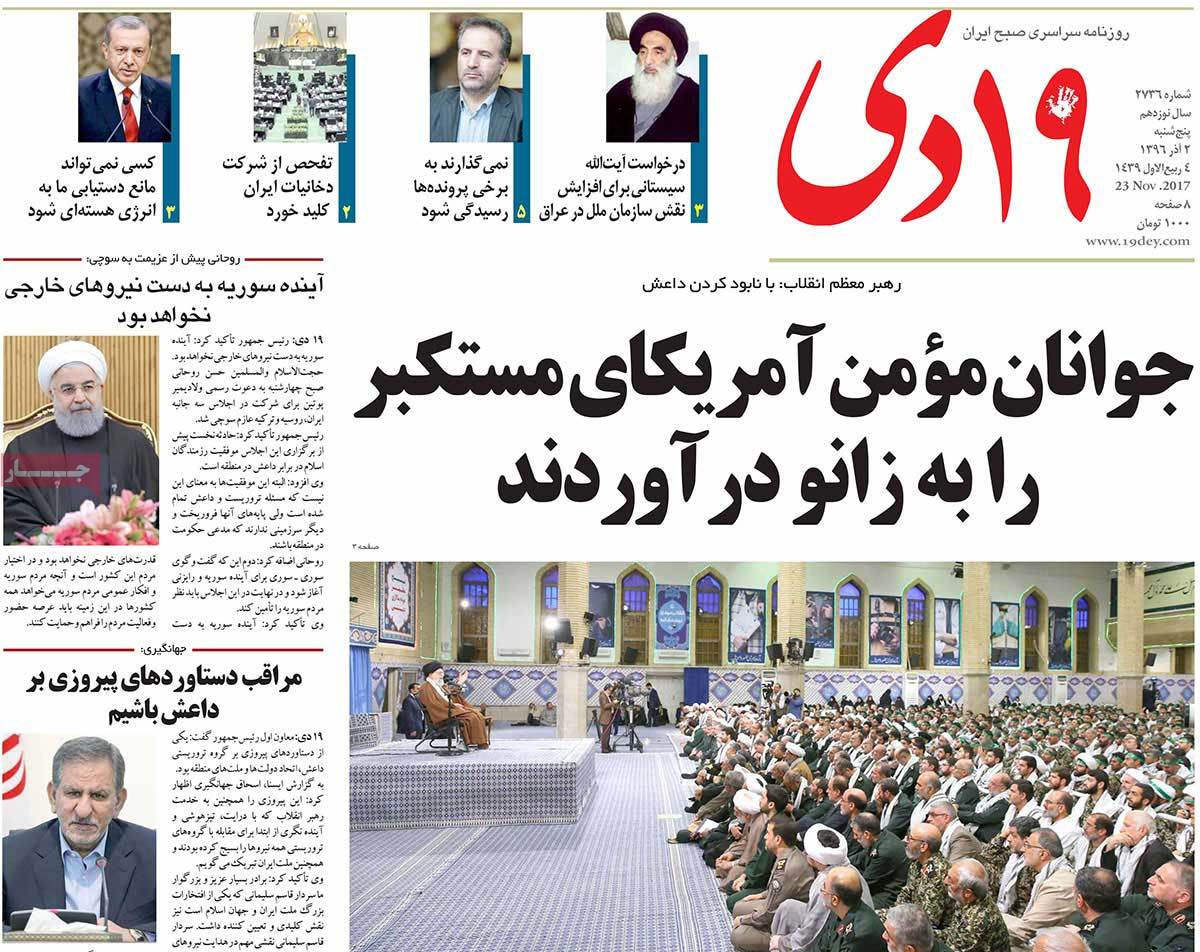 1- Netanyahu Once Again Holds Talks with Putin about Iran

3- US Isolated in Opposition to Iran Nuclear Deal: Spokesman

4- Defence Minister: We’ll Strongly Respond to Threats in Due Time 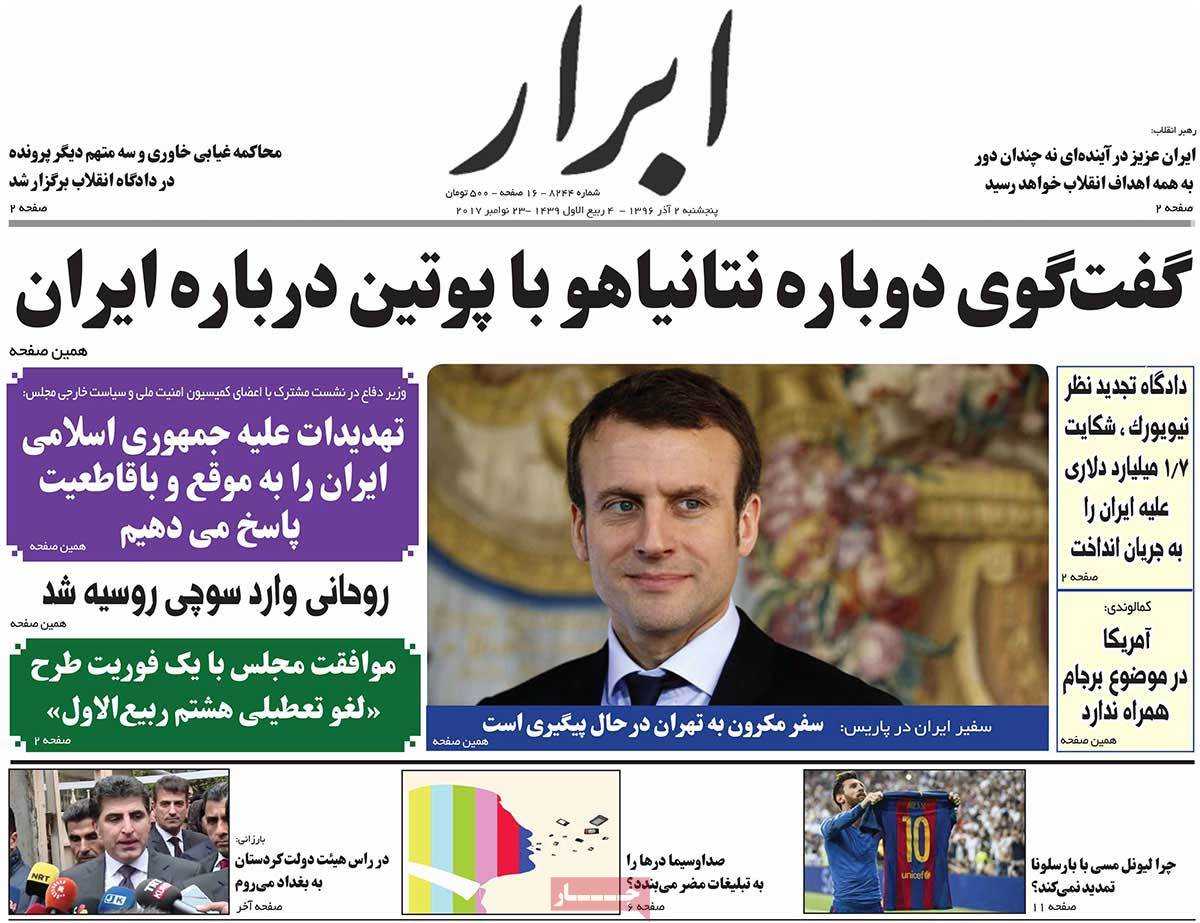 1- Iran Leader: Defeat of US Miracle of Revolution

2- Iran to Become Place Where Enemies Are Slaughtered

3- Ayatollah Makarem Shirazi: Nobel Peace Prize Should Be Given to Gen. Soleimani 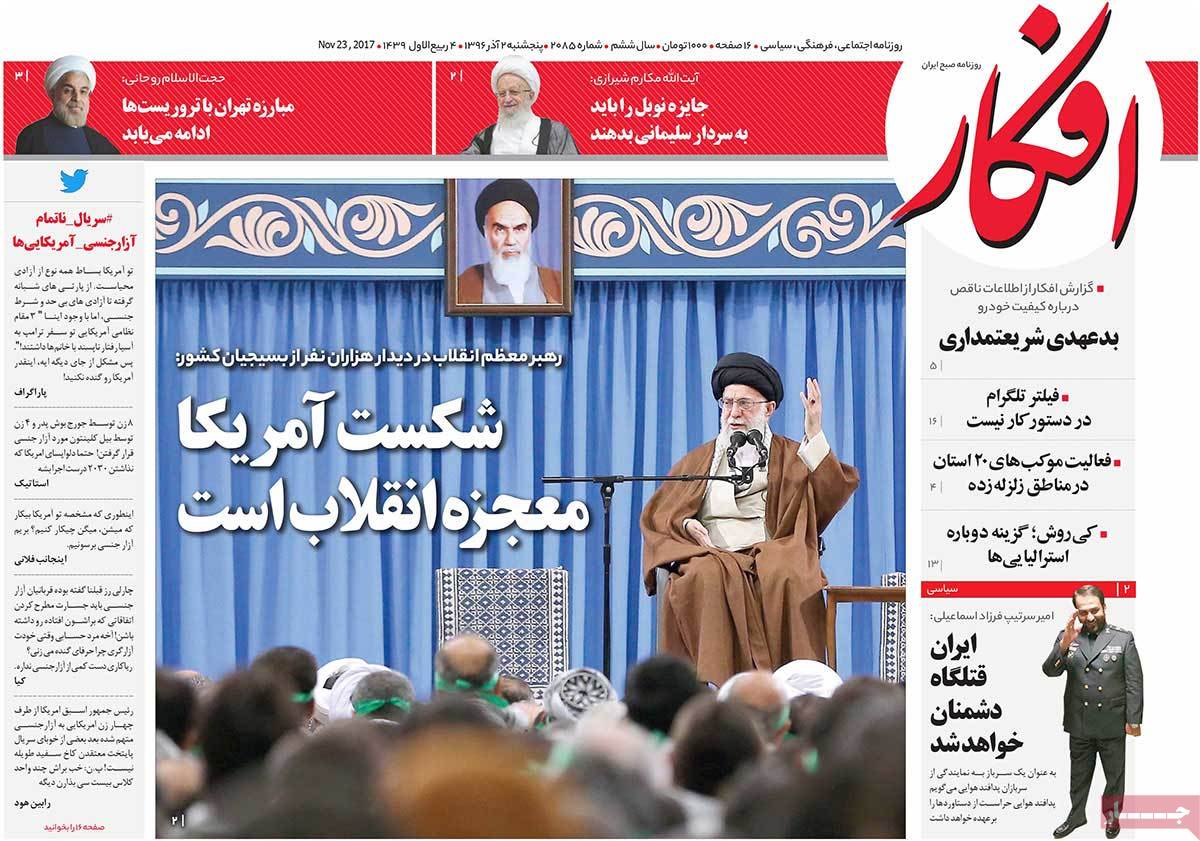 2- Women Who Want to Defeat the Giant: Three Women to Compete with Putin

4- Iran First VP: We Should Take Care of Achievements of Victory over ISIS 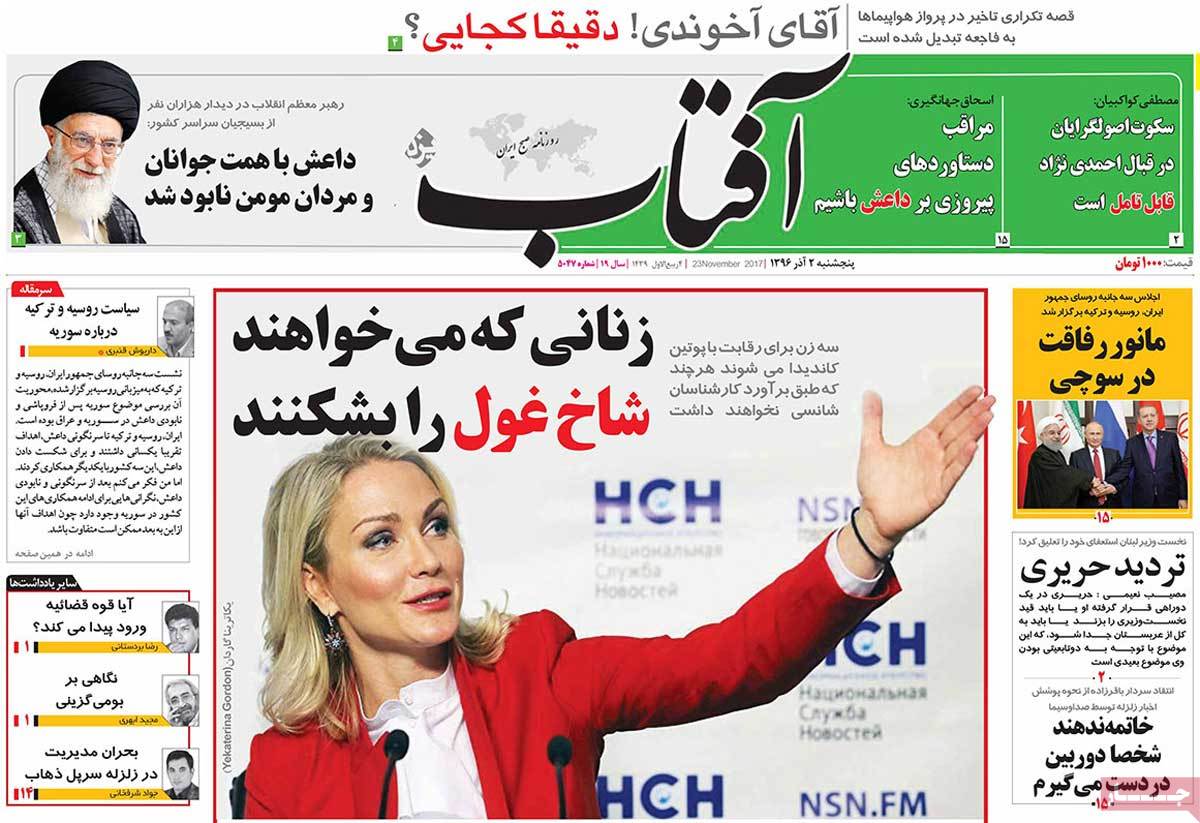 1- Hariri Backs Off after Returning to Lebanon

2- Leader: Our Dear Iran Will Realize All Causes of Revolution 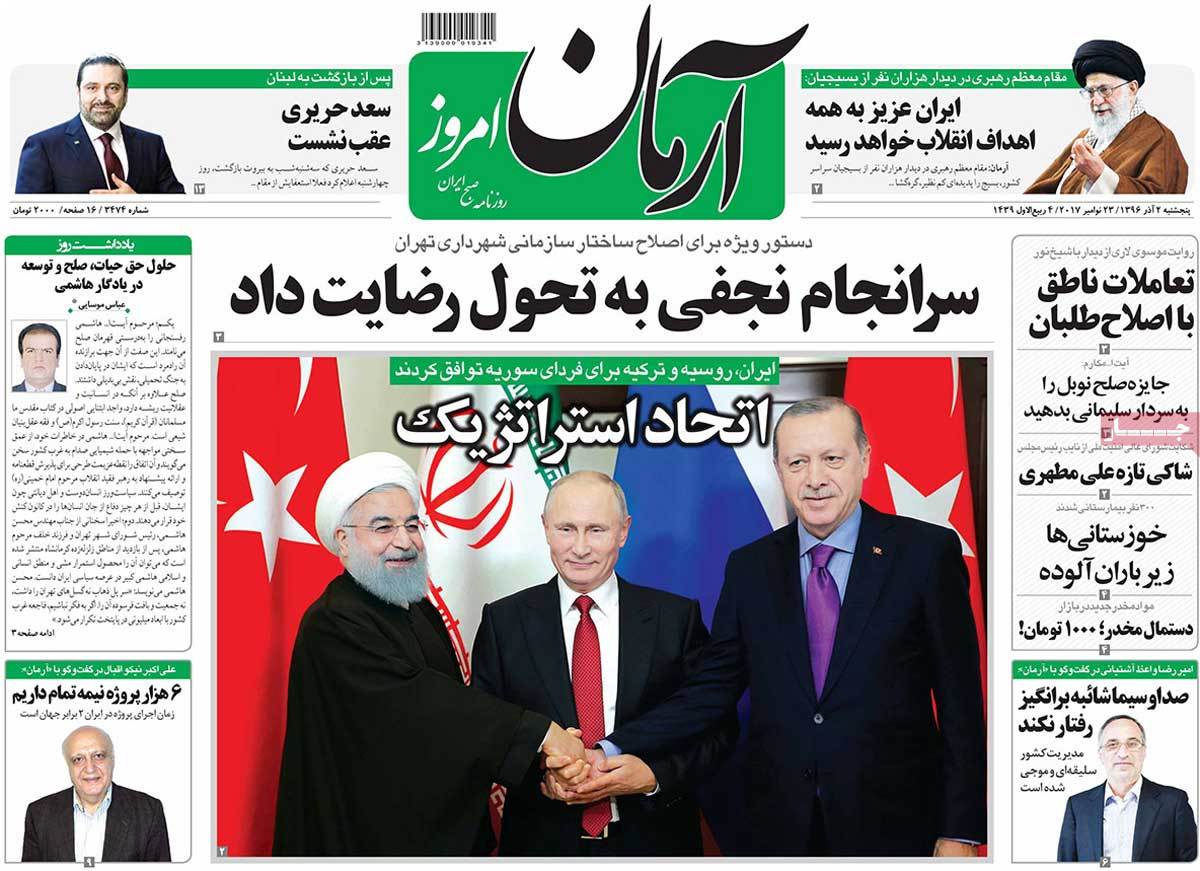 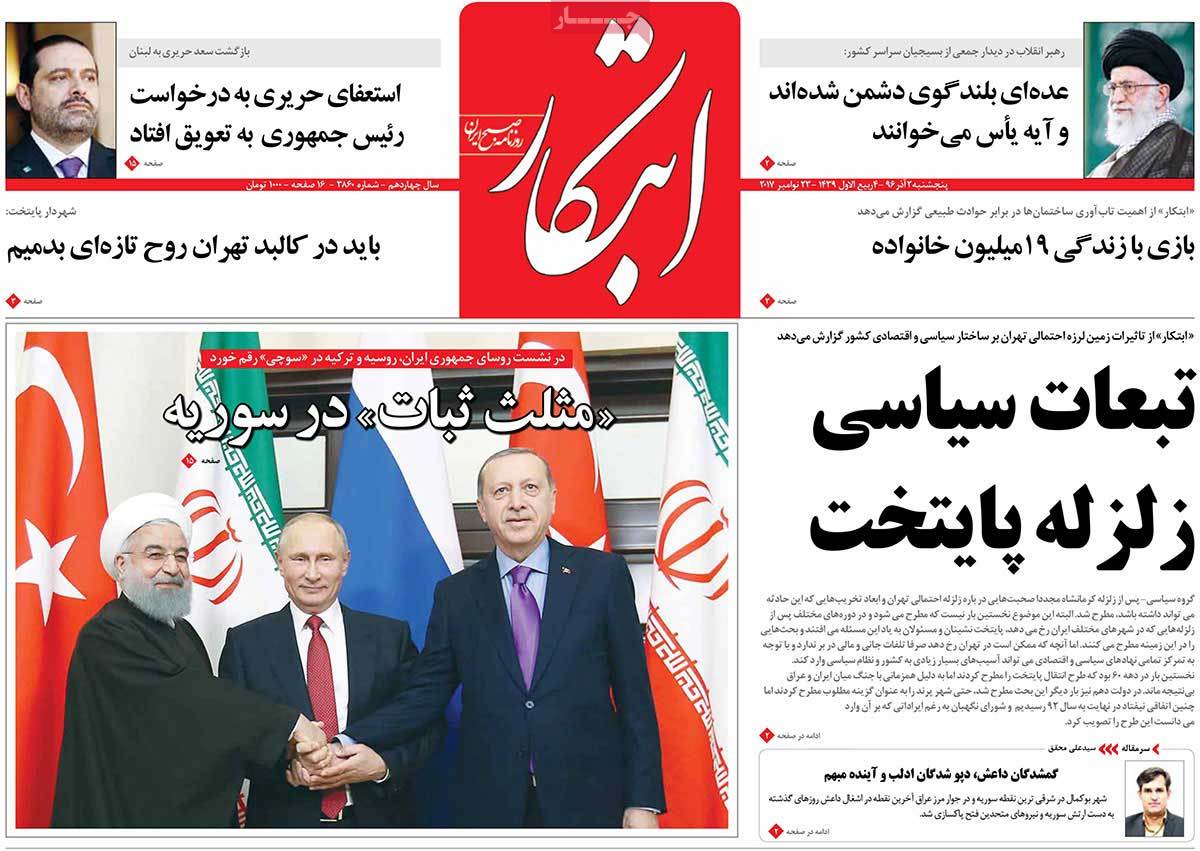 1- Rouhani: Iran’s Strategy Based on Cooperation Not Confrontation 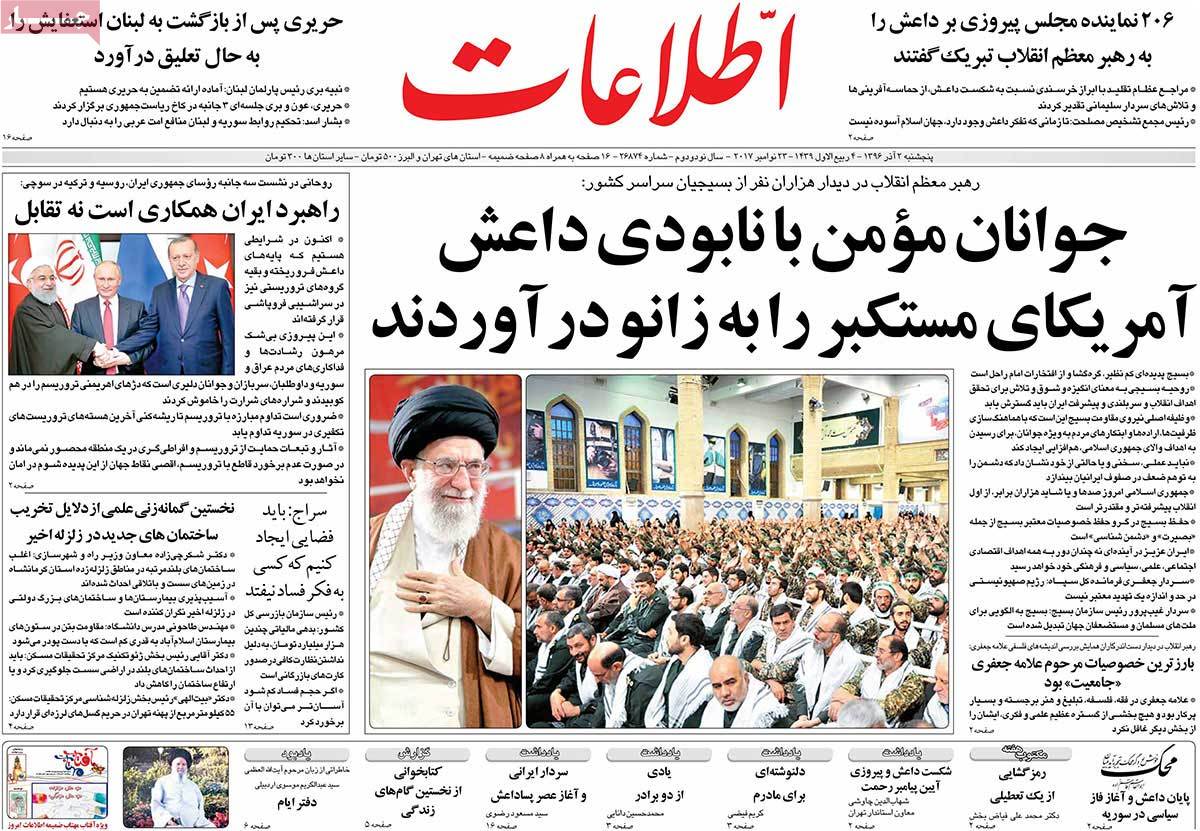 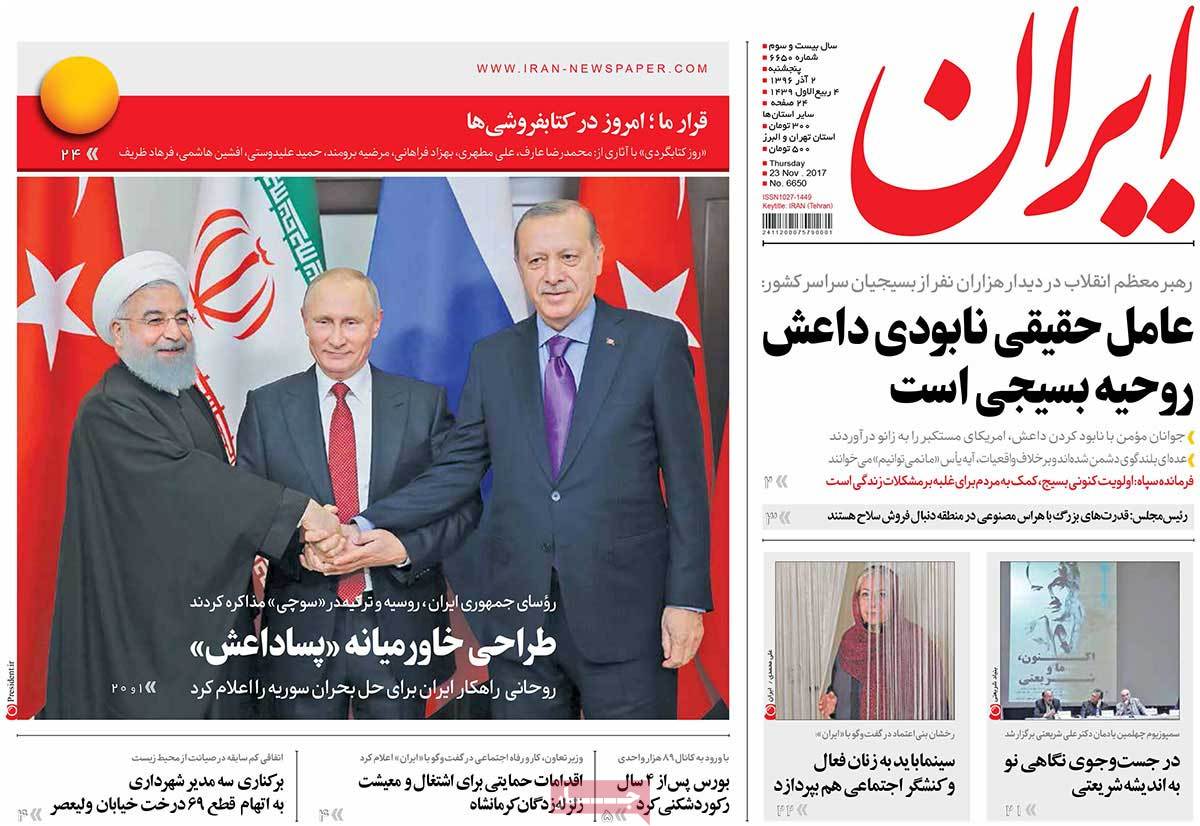 1- Iran Leader: Eradication of ISIS Shows ‘We Can Do It’ 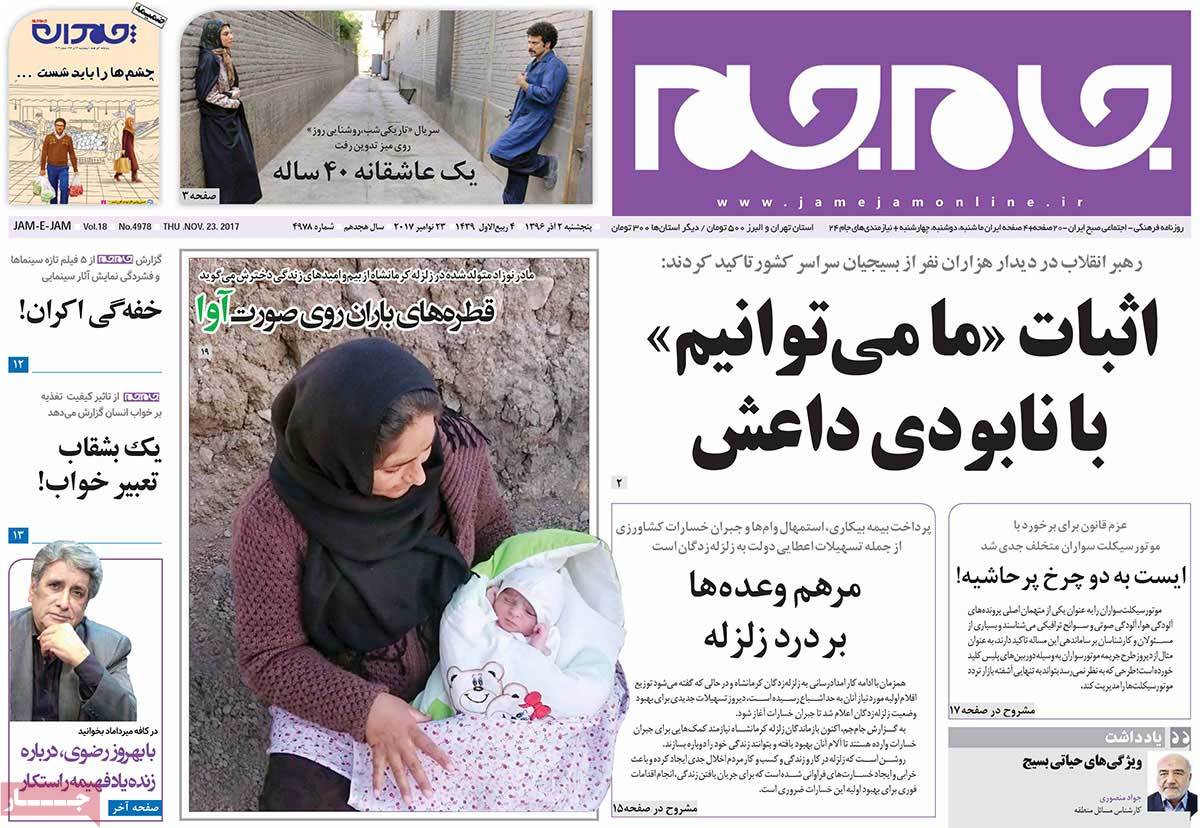 1- Iran Leader: Eradication of ISIS Sends Our Message to Other Nations

2- IRGC Chief-Commander: Any New War to Result in Eradication of Zionist Regime 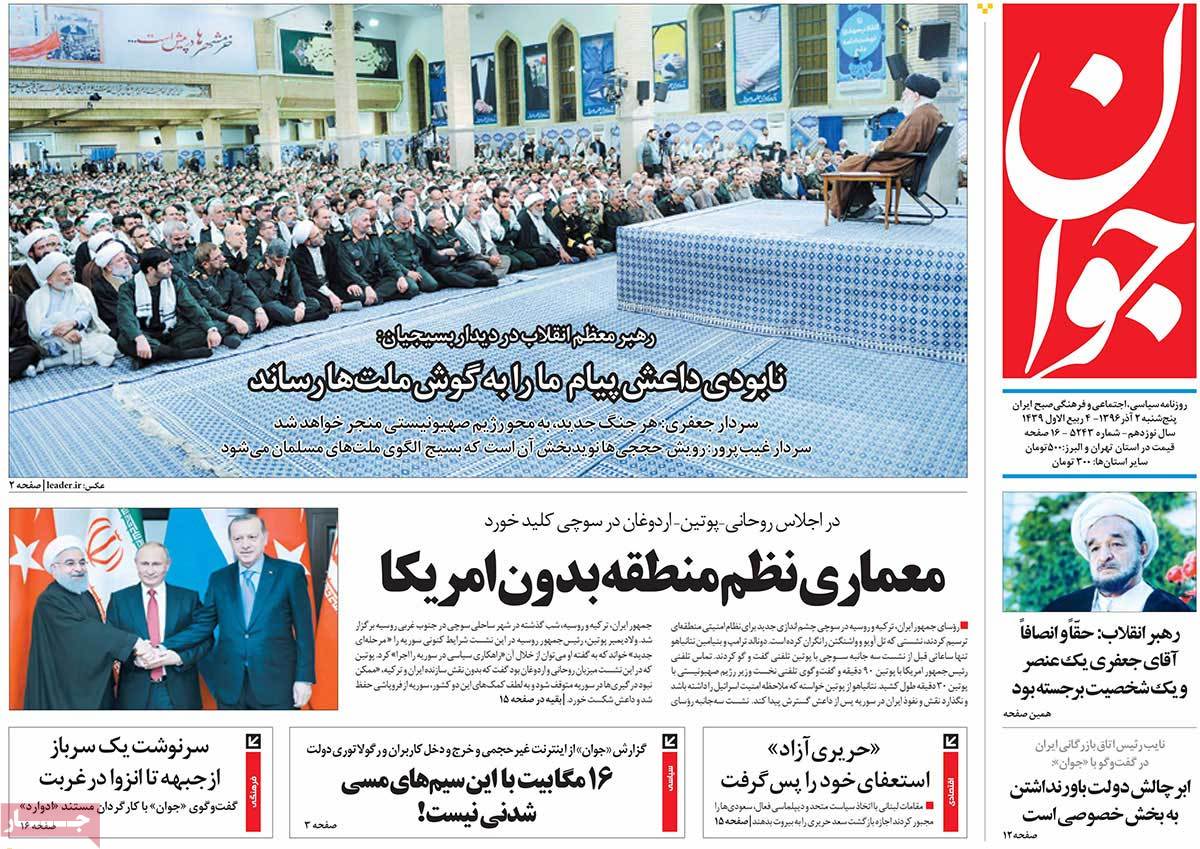 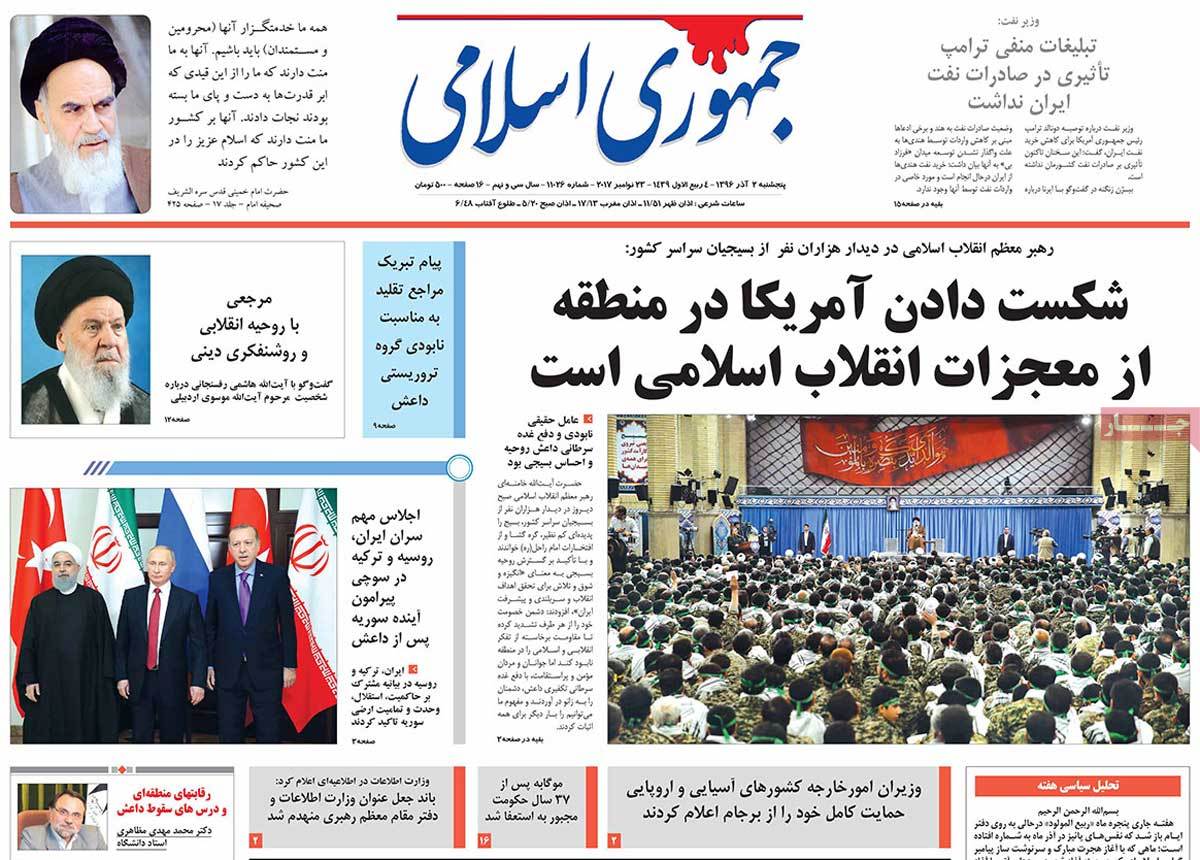 1- Iran Leader: Young Believers Brought US to Its Knees

2- Iran Axis of Stability in Region 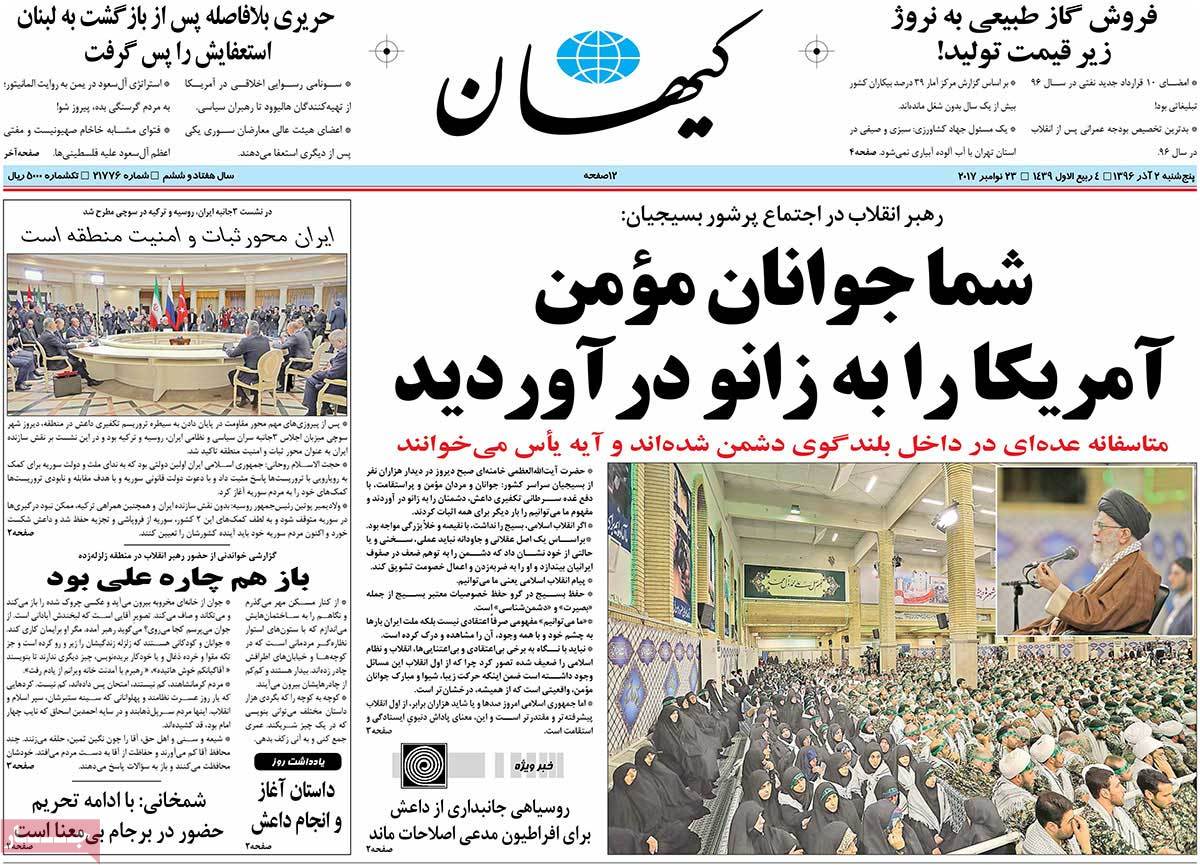 1- Macron Told Rouhani We Should Talk about Missiles 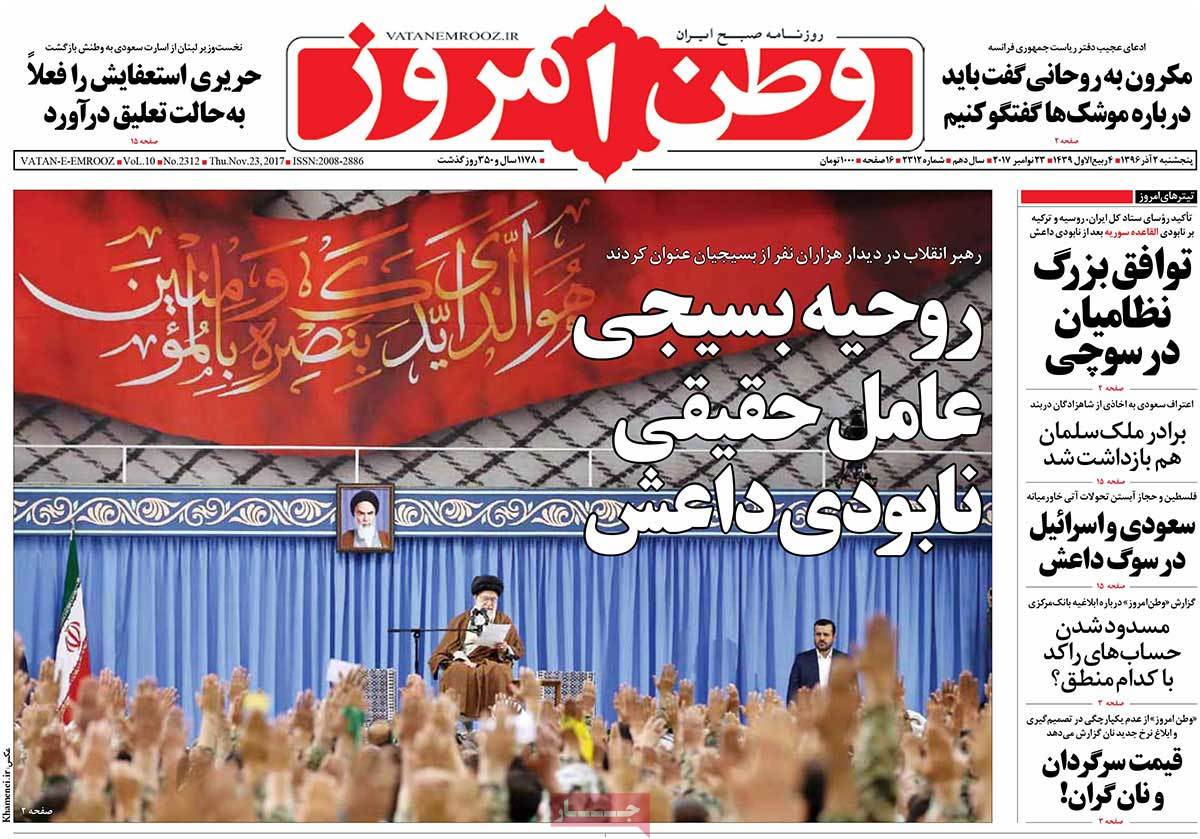