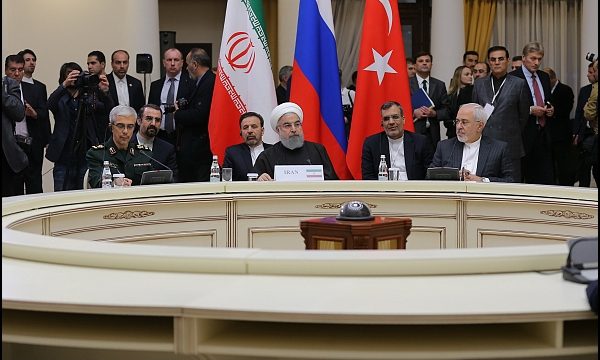 TASS– Iran, Russia and Turkey have been able to pave the way for a political settlement in Syria, and new prospects will appear today, Iranian President Hassan Rouhani said on Wednesday at a trilateral summit between Russia, Turkey and Iran.

“It is gratifying that in less than one year since the start of the Astana process the guarantor nations – Iran, Russia and Turkey – made considerable efforts to counter terrorism and extremism and paved the way for a political settlement of the Syrian crisis,” Rouhani said. “Today new prospects for the final settlement of the Syrian crisis will appear.”

“I am very glad that Iran, Russia and Turkey are in favor of Syria’s territorial integrity, sovereignty and unity and pledged to cooperate closely to establish peace and stability in that country,” he noted.

According to the Iranian president, the basis of the Islamic State (IS, terror group, outlawed in Russia) has been eliminated, while the remaining terror groups are on the brink of breaking up. “It is necessary to continue the war on terror to eradicate its last cells in Syria,” Rouhani stressed.
Iran, Russia and Turkey should coordinate their positions at all levels for the success of the Syrian National Dialogue Congress, he said.

“Our joint efforts in the last 11 months show that we can succeed in defeating terrorism only through political coordination and cooperation, including ‘on the ground,’ with the intention to fulfil specific agreements,” the Iranian president said. “As for the Syrian National Dialogue Congress, we should coordinate our positions at all levels to make it successful, like the Astana process.”.