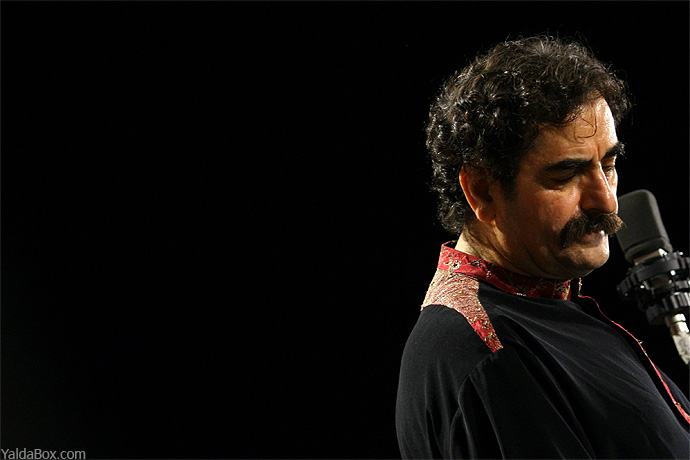 IFP- Legendary Iranian vocalist, Shahram Nazeri, and the Kamkars, Iran’s leading Kurdish family music ensemble, joined together in a concert to raise funds for the victims of the deadly earthquake which shattered their homeland Kermanshah in western Iran.

The concert was held at the Grand Hall of the Interior Ministry in Tehran on Monday and all the money raised by the concert was dedicated to the victims of the Kermanshah province earthquake.

An interesting feature of the concert was the presence of renowned Iranian cartoonist, Bozorgmehr Hosseinpour, who was drawing on the corner of the stage while Nazeri and the music ensemble were performing the concert.

Hosseinpour depicted an old man whose video has gone viral in social media over the recent days. In the video, the old man requests the Iranians in Kurdish language to lend him and his family a tent to stay in. He also vows to pay back the cost of the tent as soon as he can.

Hosseinpour’s drawing was later put on auction to raise more money for the quake-hit people. As Hosseinpour finished his drawing, Nazeri addressed the audiences shortly, saying, “My dears, I’m grateful to you for your kindness and brotherhood spirit. The great nation of Iran has shown at different occasions that they are pioneers when it comes to making critical decisions. The national unity urged Iranians from all walks of life to rush to help the quake-hit people of Kermanshah.”

Known as Knight of Iran’s vocal music, Nazeri is a contemporary Kurdish Iranian tenor from Kermanshah who sings classical music.

Meanwhile, all the organizers of the concert dedicated their revenues to the quake-hit people.

Following the devastating earthquake, numerous Iranian artists have announced that they would organize various programs to help the victims of the natural disaster.

Pop singer Farzad Farzin and rock star Reza Yazdani have pledged that they will dedicate part of the profit from their upcoming concerts to the victims.

The powerful earthquake killed over 444 people and hundreds of others.