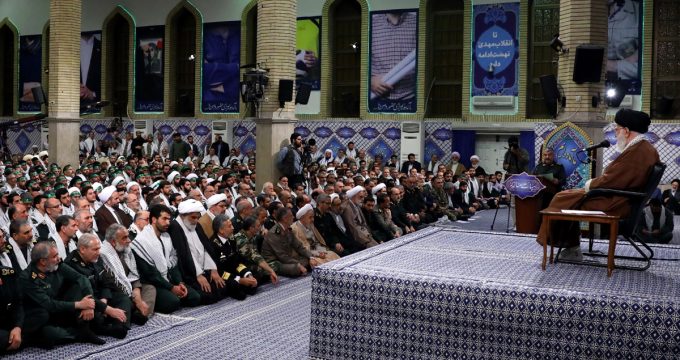 Bringing U.S. to its knees, in the region, is a miracle of the Islamic Revolution

khamenei.ir- Ahead of National Week of Mobilized Forces (Basij), a group of Basiji Commanders and members, from around the country, met with Ayatollah Khamenei this morning (Wednesday), November 22, 2107.

During this meeting Ayatollah Khamenei praised the young revolutionary individuals, who continue to celebrate and act upon revolutionary values, by stating: “The fact that, after 38 years, the youth–who never met Imam Khomeini and didn’t experience the holy defense era or the revolution–can be so zealous and influentially act (make a difference) in the region is truly a miracle of the Islamic Revolution. In certain neighboring countries some couldn’t believe that the barbaric, takfiri group ISIS could be eradicated, but they had to enter the fight, and they soon came to believe it was possible. This is how IRI’s message, the Revolution’s message, reaches out to other nations.”

Ayatollah Khamenei applauded the endeavors of the young men, in nullifying U.S. plots and conspiracies, adding that: “In the region, the Islamic Republic and you, young individuals, managed to bring the US to its knees and defeat it. All their efforts and plots were aimed at removing the ideologies of the Islamic Revolution or resistance from the region, but the exact opposite occurred.

He went on to say, “The operation in Syria and Iraq–disposing of the cancerous tumor, created by the enemies to counter the resistance–was successful thanks to devout young men.

One of the enemy’s strategies is to disappoint our youth. Unfortunately, some act like mouthpieces for the enemy, spreading disappointment, saying it’s not possible to resist such enemies. And, why not? The Islamic Republic has stood up against the enemies’ avarice and has defeated the enemy in all cases.

The Iranian people overthrew the monarchy, which was an evil, long-standing regime in Iran, while US, Europe, and the reactionaries of the region backed it. It was able to create and maintain a state based on moral values, ​​in a world full of disbelief, atheism and negligence, and they developed it [the new state] day after day.

Speaking on the success of the mobilization forces, overturning the enemies’ conspiracies, the Leader of the Revolution said: “You have witnessed that these consecutive conspiracies, which were created in this region by the US, Zionists, Arab reactionaries and others, were destroyed by the sovereignty of the Islamic Revolution. One of the conspiracies was the inhumane Takfiri group: ISIS–which was destroyed, thanks to the efforts of faithful men, with the help of those who supported the resistance force.”

Ayatollah Khamenei then mentioned how vast the manifestation of Islamic Revolution’s ideals became, in the midst of fighting the enemy, although some were doubtful, by stating: “Even in some of our neighboring countries, sometimes, they did not believe that it was possible to accomplish this [defeat of ISIS]. But, they had to join the fight: they entered the battlefield; they succeeded and came to believe it was possible. This is how the message of the Islamic Republic, the message of the revolution, reaches other nations.”

The Leader of the Revolution praised the young Basiji forces furthermore, adding: “The Mobilized Forces (Basij) is a unique phenomenon of the Islamic Revolution, which can act in all areas as required and open up the problem nodes.”

Touching on the importance of the organization, he said: “Basij represents the gathering and aligning of capacities and facilities to achieve goals. If the Islamic Revolution was only left with all it has today without their Basij, it would no doubt see a great deficiency.”

Finally, the Leader of the Revolution Ayatollah Khamenei insisted: “In every country, the element that has the last word is the manpower. The advanced materialized countries also reached a climax, because of perseverance of their active labor force, who abandoned stagnation–even if for the pursuit of money and materialism.”