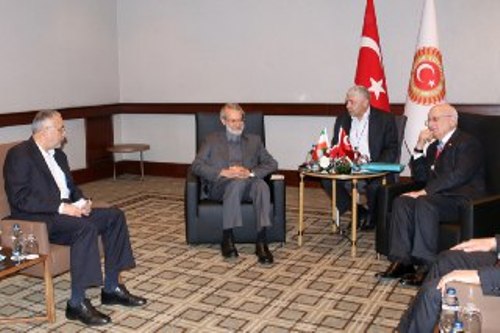 IRNA – Iranian Parliament Speaker Ali Larijani said on Tuesday that end of Daesh problem was an important achievement for Iran, Turkey and Russia.

Larijani, who is in Istanbul to take part in the 10th plenary session of the Asian Parliamentary Assembly (APA), told Turkish counterpart İsmail Kahraman that of course, certain regional countries also committed some mistakes, but Iran and Turkey had a sense of responsibility.

He said Astana talks was a positive move and Sochi session, that is underway, is of high importance and can prepare the grounds for political settlement of the issue.

Larijani then referred to the clear role of ultra-regional states in forming Daesh terrorist structures.

The parliament speaker highlighted highly important role of cooperation between Iran and Turkey in protecting Iraqi territorial integrity, and said the idea of holding referendum in the Iraqi Kurdistan was a mischief on part of Israelis and should be taken as a fresh success as they failed to achieve their goal in that case.

Larijani went on to say that of course, terrorism has not yet ended in the region and anti-security moves are underway, so, Iran and Turkey should continue cooperation.

Elsewhere in his remarks, Larijani said, ‘We are trying to raise the volume of trade between Iran and Turkey to over 30 billion as many countries are investing in Iran and there are capacities available for the Turkish businessmen’s investment in the fields of oil, gas and petrochemicals.’

He noted, ‘We are also prepared for joint activity in environment protection and tourism and grounds for the purpose are available and facilities can be delegated to the investors. Grounds for regional cooperation between Iran and Turkey in all fields are more embossed than the past.’

The Turkish parliament speaker, for his part, said Turkish President Recep Teyyip Erdogan had in his recent visit to Iran took mutual parliamentary cooperation into consideration. ‘Commercial relations between Iran and Turkey should speedily reach 30 billion dollars and exceed the level even. Turkish traders and capitalists are also interested in cooperation with Iran. Trade transactions by Iran and Turkey should be in local currency and fortunately, the two countries’ central banks signed a deal to that effect and good measures have even been taken in that direction.’

The Turkish official said, ‘We are giving a difficult test in the region and face common threats. A policy needs to be adopted to focus on territorial integrity and freedom of all regional countries and to this end, we consider dialogue as the most important thing and we take consultation with Iran as important in that concern.’

Referring to good outcome of Astana talks and cooperation with Iran and Russia, the Turkish official said, ‘We wish the world of Islam will get rid of conflict and we need to reach common point in this regard in the face of foreign threats and confront the foreign forces and the axes of evil which do not tolerate cooperation between the Iranian and Turkish governments.’

Larijani, heading a parliamentary delegation, arrived in Istanbul on Tuesday morning for a three-day visit.