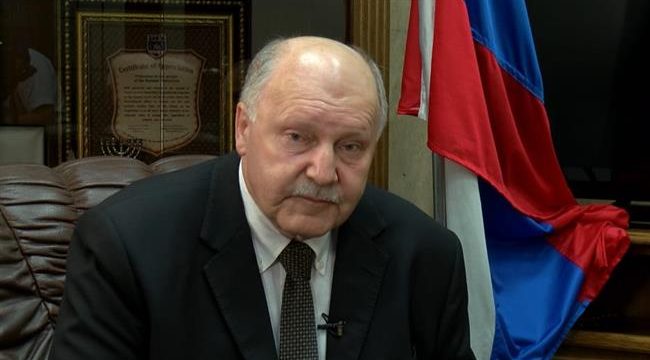 Iran only fights terrorism in Syria: Russia envoy to Israel

Writing on the Russian embassy’s Facebook page on Monday, Shein echoed Russian Foreign Minister Sergei Lavrov’s remarks on November 14, who described the Iranian and Russian military presence in Syria as “legitimate…at the invitation of the lawful government.”

Iran has been providing military advisory assistance to Syrian government forces in the fight against a myriad Takfiri terror groups operating to topple the Damascus government.

Earlier this month, the US, Russia and Jordan reached an agreement in Amman to establish a temporary de-escalation zone in southwest Syria. The deal was part of a similar trilateral accord back in June.

Reports said the agreement provides for the withdrawal of “non-Syrian fighters” allied with the Syrian government from the truce area.

However, Lavrov said that in the deal “there was no talk of Iran, furthermore, of pro-Iranian forces’” withdrawal.

Elsewhere in his message, Shein said that he was surprised by the Israeli media’s reaction to the agreement on Syria and to Lavrov’s defense of Iran’s presence there.

“Russia consistently acts in conformity with norms and principles of the international law that legitimates the Iranian presence in Syria. The aim of this presence is confined to war on terrorism. To this end, Russia cooperates with Iran in Syria,” he added.

Separately on Monday, Lieberman requested a boost in Israel’s military budget, citing “a significant change in the security situation in the region.”

Israel’s five-year military budget, which was approved in 2015, was set at 56.1 billion shekels ($16 billion) a year), excluding the annual aid from the US.

Lieberman said he wants the budget increased by 4.8 billion shekels ($1.37 billion) over the next three years.

The Israeli minister also identified several areas of particular concern for the Israeli regime, among them the massive Russian presence in Syria and a “dramatic acceleration” in Iran’s military build-up as well as the consolidation of its role in Syria.

“90 percent of Syria’s populated territory is back under [President Bashar al-]Assad’s control, …. In this sense, the Russians achieved their goals in Syria” – preserving the Assad government and undermining the Daesh Takfiri terrorist group, he added.

The Tel Aviv regime has been accused of colluding with terrorist groups, such as Daesh, which is currently losing ground against the Syrian army.