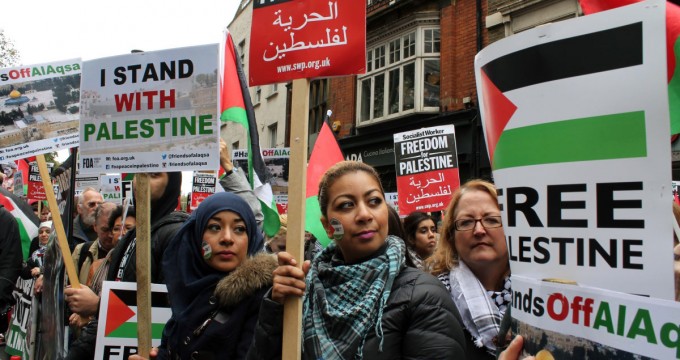 The U.S. is complicit in slow-motion genocide in Palestine

American Herald Tribune | Daniel Kovalik: When I was a young man growing up in the 1980’s, it was hard to ignore the Palestinian struggle.  It was common, for example, to see posters of Yasser Arafat and Palestinian flags around town and to see people wearing their keffiyehs which Arafat made popular and which everyone then associated with the Palestinian cause.  The great Edward Said, who I imagine few even remember today, was still alive and writing prolifically and beautifully about the Palestinian fight for justice.  And, in general, there was open discourse about Palestine and the injustice of the Israeli occupation.

Today, even notwithstanding the fledgling BDS movement and limited moves in Congress to cut off funding for Israeli forces who arrest and abuse Palestinian children, discussion of the Palestinian cause is muted at best. Indeed, even many people sympathetic with the cause have been bullied into silence lest they be accused of anti-Semitism and ostracized.

I must confess that I have spoken too infrequently about the Palestinian issue throughout the years, feeling also intimidated by the possible backlash. It is now impossible for me, however, to remain silent. In the course of my teaching international human rights, I have become very good friends with a few individuals from Gaza — most notably with my legal intern Enas who has become a part of my family. I cannot be true to her and our friendship without taking a firm stand against what I view to be some of the worst oppression on this earth.

As Amnesty International explains in its most recent annual report,

Gaza remained under an Israeli air, sea and land blockade, in force since June 2007. The continuing restrictions on imports of construction materials under the blockade, and funding shortages, contributed to severe delays in reconstruction of homes and other infrastructure damaged or destroyed in recent armed conflicts. Continuing restrictions on exports crippled the economy and exacerbated widespread impoverishment among Gaza’s 1.9 million inhabitants. The Egyptian authorities’ almost total closure of the Rafah border crossing with Gaza completed its isolation and compounded the impact of the Israeli blockade.

The grisly results of this total isolation and blockade of Gaza is human suffering which is almost impossible to describe. As Noam Chomsky often explains, the result is that Gaza is now the “largest open-air prison in the world.”

According to the United Nations which puts it quite bluntly, Gaza will be “unlivable” by 2020 – that is, in just a couple short years. As the UN explains, “Gaza has continued on its trajectory of ‘de-development’, in many cases even faster than we had originally projected.” One of the biggest issues confronting Gaza, the UN explains, is the near total lack of electricity for its residents, which makes keeping food and many life-saving medicines impossible.

The truth is that, for many, Gaza is already unlivable. In a recent interview in the Israeli paper Haaretz entitled, “Gaza Kids Live in Hell: A Psychologist Tells of Rampant Sexual Abuse, Drugs and Despair,” trauma treatment expert Mohammed Mansour relates that the situation in Gaza has taken a drastic turn for the worse even in recent months.  Dr. Mansour explains, in his most recent visit,

I encountered a large number of cases of sexual abuse among the children.  That’s a phenomenon that has always existed, but in this visit, and also in the previous visit, in August, it suddenly reached far larger dimensions.  It’s become positively huge.  More than one-third of the children I saw in the Jabalya [refugee] camp reported being sexually abused.  Children from ages 5 to 13.

Dr. Manour makes it abundantly clear that it is the Israeli blockade and the resulting “de-development” of Gaza that is leading to this dire situation:

Most people don’t work, and those who do, earn pennies – the average salary is 1,000 shekels a month [$285].  Mentally and physically, parents are simply not capable of supporting their children.  They are immersed in their own depression, their own trauma.  . . .

I’ve seen the starvation.  I visit meager, empty homes.  The refrigerator is off even during the hours when they have electric power, because there’s nothing in it.  The children tell me that they eat once a day; some eat once every two days.

As Dr. Manour concludes, “[t]he trauma does not end and will not end. Adults and children live in terrible pain, they’re only looking for how to escape it.  We also see growing numbers of addicts.”

Of course, while few in this country are willing to say it, this destruction of the very social fabric of Gaza is according to plan.  Israel is intent on the destruction of the Palestinian people, and it is engaged in a slow, patient, but systematic genocide.

Given that the U.S. props up Israel with billions of dollars of annual military support, the U.S. too is responsible for this slow-motion genocide. And the citizens of the U.S. can no longer be silent as our tax dollars go to support this unspeakable crime. The plight of the Palestinian people cries out for justice – a justice which we must give them.