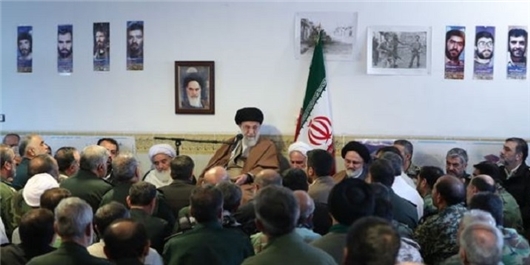 FNA- Supreme Leader of the Islamic Revolution Ayatollah Seyed Ali Khamenei held a special meeting with provincial and local officials and a number of military commanders in the Western province of Kermanshah on efforts required to restore normal life in the quake-stricken areas.

“Currently, the most important priority is providing houses to the quake-stricken people and reconstruction of the destroyed and damaged regions which should be done with the support of different military and civilian apparatuses and through concentrated management, jihadi work and necessary speed,” Ayatollah Khamenei said, addressing senior officials and commanders in Kermanshah province on Monday.

He appreciated the relevant officials for relief and rescue operations during the first hours after the 7.3-richter earthquake in Western Iran, and said the first needs of people should be supplied immediately and they should be provided with heating devices for the cold days of winter.

“In addition to focusing on management, jihadi work, continued efforts and speed should be on the officials’ agenda,” Ayatollah Khamenei said.

Ayatollah Khamenei visited the quake-stricken areas in the Western province of Kermanshah on Monday morning.

General Moussavi and General Jafari for the second time in a week visited the quake-stricken areas in the Western parts of the country on Sunday.

The aim of the visits was monitoring the progress of aiding and efforts to accommodate the quake-hit people in Western Iran by the Army and IRGC forces.

The two top commanders had also earlier traveled to the regions which were rattled and destroyed by the 7.3-richter earthquake on November 12.

Also on Sunday, Iranian Parliament Speaker Ali Larijani along with the oil and economy ministers also arrived in the Western city of Kermanshah to visit the regions hit by the devastating quake.

Larijani was in Kermanshah to receive firsthand account of the relief and rescue operations in the quake-stricken areas.

He announced plans to construct tens of thousands of new houses in the quake-hit areas in Western Iran.

“11,000 rural houses and 4,500 urban residential units have been destroyed by the quake and we need to build 30,000 houses,” Rouhani said while visiting the quake-stricken regions in Kermanshah province on Tuesday.

A 7.3-magnitude earthquake shook the Western province of Kermanshah and the regions bordering Iraq on November 12. The quake was felt in some neighboring states as well.