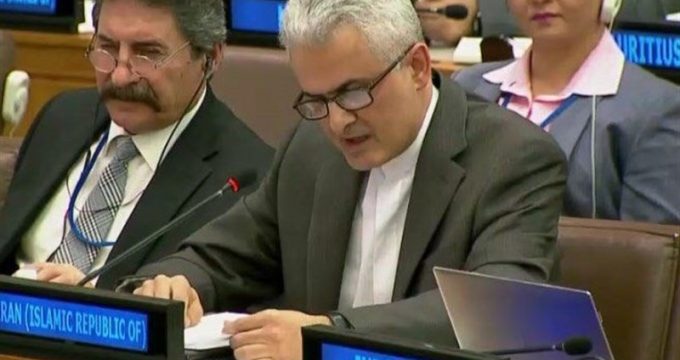 Press TV – A senior Iranian diplomat at the United Nations (UN) says Saudi Arabia is the birthplace of the dangerous ideology known as Takfirism, which is employed by such terrorist groups as Daesh.

Responding to earlier remarks by a Saudi UN diplomat, Iran’s Counsellor and Permanent Representative to the UN Mohammad Hassani-Nejad said on Friday, “One cannot afford to underestimate the toxic danger that is the Saudi-born ideology of Takfirism.”

On November 14, the Third Committee of the UN General Assembly adopted a Canadian-drafted non-binding human rights resolution against Iran with 83 votes in favor, 30 against, and 68 abstentions. Saudi Arabia’s UN Ambassador Abdallah al-Mouallimi said afterwards that Iran had adopted a sectarian approach in Iraq, Lebanon, and Syria and that the resolution shed light on what he called human rights violations taking place in Iran.

Hassani-Nejad said in his Friday remarks that Saudi Arabia was presenting “its inherent sectarianism and prejudice as support for human rights.”

“There is hardly a more foolish thing in the world of politics than Saudi Arabia presenting its inherent sectarianism and prejudice as support for human rights,” the Iranian diplomat said.

Takfirism is largely influenced by Wahhabism, the radical ideology dominating Saudi Arabia and freely preached by Saudi clerics. Followers of the extremely intolerant ideology declare people of other faiths and beliefs as “infidels” and, based on “decrees” from Saudi clerics, rule that they should be killed.

“The Saudi-born Takfiri ideology,” Hassani-Nejad said, “acts like the predator species, which seeks to have all other species go extinct. The Saudi government, Saudi charities, and Saudi-backed organization continue to be supporting this lethal poison (Takfirism), which provides the necessary hardware and software for terrorism and extremism.”

He said the Saudi envoy’s “lies” did not change the fact that “Saudi Arabia is behind terrorism and the… ideology that nourishes it.”