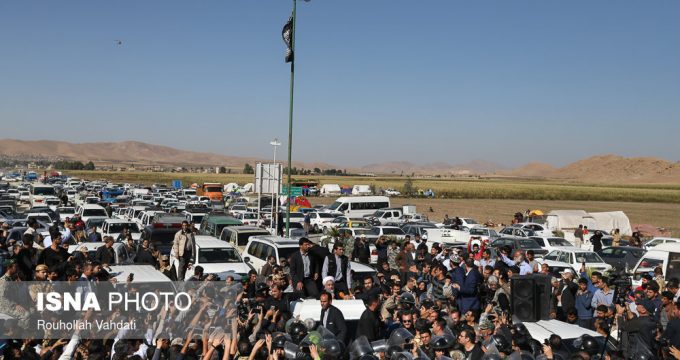 IFP – Iranian President Hassan Rouhani on Tuesday morning arrived in Kermanshah Province to visit the areas struck by the Sunday night’s deadly earthquake, which has so far killed 430 people and wounded over 7,000.

Upon arrival in Kermanshah, Rouhani offered his condolences on behalf of the Iranian nation to the quake-stricken people of Kermanshah.

He said the government will give reconstruction grants and loans to the quake-hit people to help them rebuild their houses as soon as possible.

He also vowed that the Iranian people and his administration will stand by the people affected by the deadly earthquake.

Rouhani also wished that his next visit to the province would be aimed at opening construction projects.

The Leader of Iran’s Islamic Revolution Ayatollah Seyyed Ali Khamenei has also sent a delegation to the province. The delegation includes the Leader’s representative in the Iranian Red Crescent Society and his representative in Kermanshah who arrived in the province on Tuesday to personally monitor the relief and rescue operations and the degree of damages caused to the region.

They will finally submit a report to the Leader on the quake-hit areas and the people’s problems there.

Rescue operations are underway in the western regions. According to the latest figures, at least 430 people have lost their lives and at least 7,370 others sustained injuries in the tremor. Some 12,000 homes have also been completely destroyed in the incident.