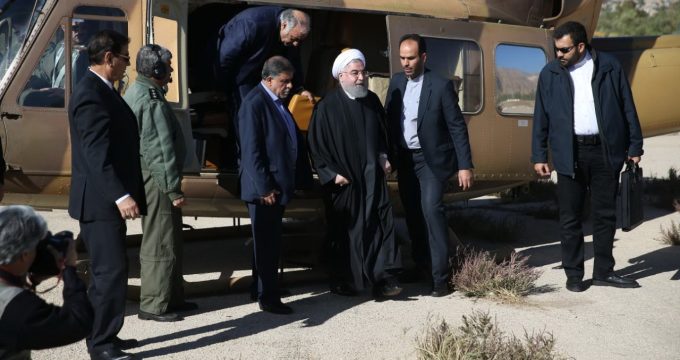 President.ir: President offered condolence to the families who lost their loved ones in the earthquake and wished swift recovery for the injured and said: “The government will grant long-term loans and ex gratia payments for rebuilding damaged homes and help the lives of the injured and those whose homes were in damaged”.

Dr Hassan Rouhani appreciated the people of Kermanshah province and entire Iran for always together and helping each other in the incident, saying: “We should appreciate the efforts of aid workers and the armed forces. The government has mobilised all its facilities for the rapid reduction of the people’s problems”.

Referring to people’s need for tents and temporary living facilities in earthquake-hit areas, the President said: “Today, the Disaster Management Headquarters will be formed in Kermanshah and budget will be allocated for reconstruction and compensation”.

The president emphasised that the Housing Foundation of the Islamic Revolution would use its full potential to rebuild people’s houses, and all the responsible agencies would also help the Foundation.

Dr Rouhani pointed out that natural disasters such as earthquakes, floods and storms are divine tests for servants in the direction of helping each other, adding: “The government is trying to pass this test”.

“As early as the first hours of the incident, we started our efforts to solve the problem that people had, and all agencies and authorities have been mobilised in this direction,” Rouhani continued.

“Hospitals in Tehran, Kermanshah and certain provinces are mobilised to provide immediate health care to the injured,” the president said.

Dr Rouhani pointed out that in the incident, some newly-built buildings constructed in cooperative and state-owned schemes have been damaged, adding: “The faults and shortcomings in the construction of these buildings should be investigated. And the government will surely follow up on these issues and identify the culprits and introduce them to the people”.

The president stressed: “The government will not leave the people alone, and we will serve as the servant of the people.”