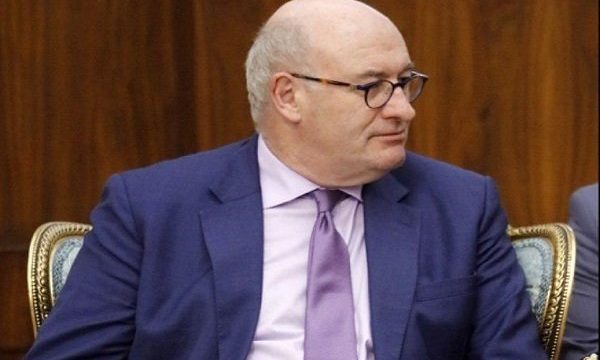 MNA– European Commissioner for Agriculture and Rural Development Phil Hogan announced that his visit to Iran aims to enhance cooperation between the EU and Iran in the field of agriculture and rural development.

Heading a 70-strong delegation of senior European officials and business leaders to Tehran, Phil Hogan met with senior Iranian officials, Minister of Agriculture Mahmoud Hojjati and the Chairman of Agriculture, Water and Natural Resources Commission Ali Akbari on Sunday at the venue of Iranian Parliament.

The two officials oversaw the singing of an MoU on developing cultivation of corn and sorghum seeds in Iran.

The senior EU envoy also met with Iran’s First Vice-President Es’hagh Jahangiri on Saturday, which he described in his Twitter as “very positive meeting on improving EU-Iran relations.”

He held three press conferences on Saturday including a joint statement with Iranian Agriculture Minister Hojjati.

The other meeting of Mr. Hogan on Saturday was with Iranian Minister of Health, Hassan Ghazizadeh Hashemi.

Also on his Saturday agenda in Tehran, Mr. Hogan addressed the opening session of the EU-Iran Agri-Food Business Forum delivering the keynote speech as the Member of the EC in charge of Agriculture and Rural Development. Masoud Khansari, Chairman of the Tehran Chamber of Commerce, Industries and Mines and Ali Akbar Mehrfard, Iranian Deputy Minister of Agricultural were also present at the event.

The European side has announced the aim of the visit as to enhance cooperation between the EU and Iran in the field of agriculture and rural development, in particular with a view to further developing bilateral trade in agri-food products between the EU and the Islamic Republic of Iran.

There is little established trade in agri-food products between the EU and Iran, but bilateral exchanges have increased significantly in the past year following the landslide nuclear deal of July 14, 2015, between Iran and 5+1 countries under the watch of EU high representative for foreign relations. Bearing in mind the Iranian population of 80 million, the potential for increasing trade in EU agri-food products is significant.

Iran is the world’s seventh largest producer of citrus fruits, including a variety of oranges, tangerines, limes and lemons.

Agriculture accounts for 13% of Iran’s GDP and over 20% of its employment. The sector has traditionally been the key foundational block of the Iranian society but it began to lose much of its significance when the first oil wells were struck.