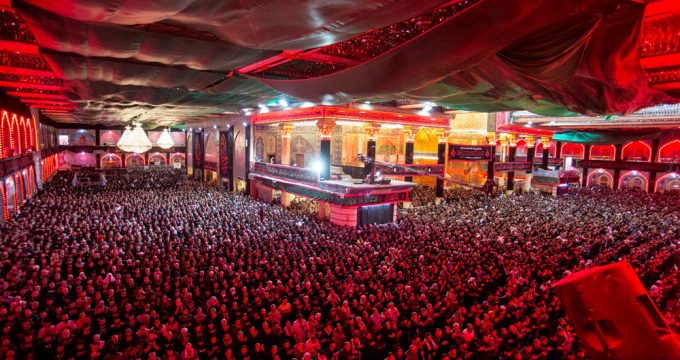 November 12, The Iran Project – Millions of pilgrims from across the world traveled to Iraq’s holy city of Karbala to mark 40 days since the martyrdom anniversary of Imam Hussein, the grandson of Prophet Muhammad (PBUH).

Large groups of black-clad mourners, many of whom have reached Karbala after trekking at least 76 kilometers from Najaf, observed Arbaeen, known as the largest annual religious gathering on earth.

Arbaeen, meaning the fortieth in Arabic, is observed 40 days after Ashura, the tenth day of the lunar calendar month of Muharram, when Imam Hussein, the third Shia Imam, was martyred at the hands of the tyrant of the time, Yazid I, back in the seventh century.

Every year, millions of pilgrims reach Karbala for Arbaeen from across Iraq and abroad, on foot especially neighboring Iran, which marked the occasion this year on Thursday (Nov 9).

Speaking to thousands of student groups mourning for Imam Hossein on the 40th day of his martyrdom on Thursday (Nov 9), Leader of Islamic Revolution Ayatollah Khamenei said the road gone through the Islamic Revolution and the horizon ahead herald a promising and prosperous ending for its goal.

Ayatollah Khamenei expressed satisfaction with the signs of hope, progress and success witnessed in the path of the 1979 Islamic Revolution, adding the same prospect is expected for its future.

Concurrent with Arbaeen of Imam Hossain (PBUH), student groups from across the nation held a mourning procession on Nov. 9, at Imam Khomeini’s Hosseinieh with the Leader of the Revolution Ayatollah Khamenei in attendance.

While praising the magnificent mourning ceremonies in commemoration of Arbaeen, Leader said these gatherings and religious rituals should persuade the sense of determination and stability among the people on this revolutionary path and not be affected by the difficulties.

Ayatollah Khamenei applauded the pilgrimage of Arbaeen to be the culmination of people’s love for their God of, adding “the great march for Arbaeen makes a civilization and is the manifestation of the love and faith of the people and the authority of the truth.”

Iraq’s top Shia cleric said more than 13 million have gathered in the holy city of Karbala to mark Arbaeen.

Grand Ayatollah Ali al-Sistani praised Iraqi security forces for securing the routes in and out of Karbala for visitors traveling from across Iraq and beyond.

The Independent in a report on Nov 9 wrote that millions of black-clad Shia pilgrims are converging on the holy city of Kerbala for the Arbaeen religious commemoration, the largest annual gathering of people anywhere on earth. Walking in long columns stretching back unbroken for as much as 50 miles, sleeping and eating in tents erected by supporters beside the road, the event has become an overwhelmingly powerful display of Shia belief and solidarity.

Arbaeen is the living symbol of the rise of the Iraqi Shia, a highly significant development in the Middle East, but it has happened only recently, the report added.

The long ritual walk to his golden-domed shrine in that city – some walkers spend 10 or 12 days on the road from Basra or Kirkuk, others two or three days from Najaf – comes on the 40th day of the mourning period as religious fervor reaches its peak among the faithful.

Meanwhile, the Iranian Ambassador to Iraq Iraj Masjedi thanked the Iraqis for holding the Arbaeen ceremony peacefully and calmly, and said that the pilgrims are on their back to Iran, adding that there were no problems in accommodations and food during the annual religious procession.

He also said that wherever and whenever necessary Iran will be by side of Iraqi brothers.

There have been no reports of security events, but two terror plans were discovered and neutralized.

To sum up, it is worth mentioning that although Imam Hussein and 72 of his loyal companions, including family members, were martyred on Ashura, the tenth day of the lunar month of Muharram, in the battle of Karbala against the second Umayyad caliph, Yazid I, in 680 A.D., the Shia Muslims’ passion to Ahlul Bayt, The Household of Prophet Muhammad (PBUH), would never end and each year a large number of pilgrims from different walks of lives and countries attend in Arbaeen pilgrimage, one of the largest religious gatherings of the world.