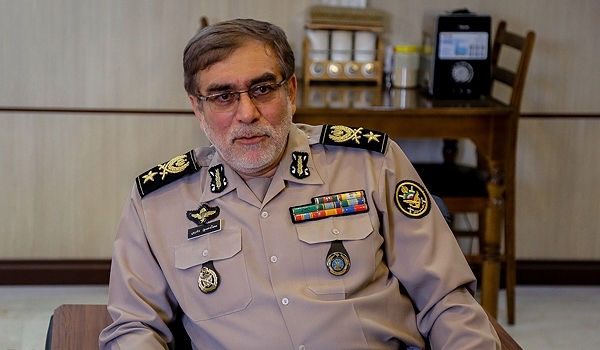 Tasnim – The newly appointed lieutenant commander of the Army made assurances that the country’s armed forces are keeping a close watch on threats in the Middle East and prepared to counter possible threats posed against the Islamic Republic.

Speaking to reporters in Tehran on Saturday, Brigadier General Mohammad Hossein Dadras said, “The existing threats in the region are continuously being monitored…”

The commander further emphasized that the Army looks deep into foreign threats and is prepared to counter them.

He also pointed to possible changes in the country’s defense sector and said they should be commensurate with foreign threats.

In recent years, the Middle East has been plagued with Takfiri terrorist groups like Daesh (also known as ISIS or ISIL), which are believed to have been created and supported by the West and some regional Arab countries.

However, Iran is considered by many experts as the “island of stability” in a region which faces many security challenges.

In August 2016, Leader of the Islamic Revolution Ayatollah Seyed Ali Khamenei highlighted the strong security in Iran despite crises and insecurity in the region.

“Thank God and through the appreciated efforts and endeavors of the military and security forces, the country enjoys a strong security shield while regional countries are filled with incidents and insecurity,” the Leader said.