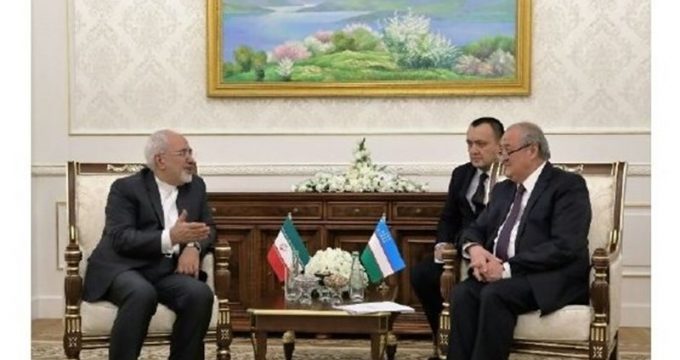 Tasnim– Visiting Iranian Foreign Minister Mohammad Javad Zarif and his Uzbek counterpart, Abdulaziz Komilov, held talks on a host of topics, including ways to strengthen relations between Tehran and Tashkent in diverse fields.

In the meeting held in the Uzbek city of Samarkand on Friday, Zarif and Komilov exchanged views about the new chapter opened in the history of bilateral relations between Iran and Uzbekistan.

The two sides also discussed efforts to remove obstacles in the way to boost cooperation between the two countries in various areas, including banking, trade, transit, as well as in scientific and technological fields.

A trilateral partnership between Iran, Uzbekistan, and Afghanistan in rail transport industry was another topic discussed in the meeting.

Earlier on Friday, Zarif had taken part in the international conference on security and sustainable development opened in Samarkand.

The Iranian top diplomat’s visit to Uzbekistan was part of his tour of Central Asia, which had taken him to Tajikistan earlier.

The visits came at the official invitation of the authorities of the two Central Asian countries.

During his trip to Tajikistan, Zarif held talks with Tajikistan’s high-ranking officials, including President Emomali Rahmon and Foreign Minister Sirodjidin Aslov, about ways to boost Tehran-Dushanbe ties in various areas.