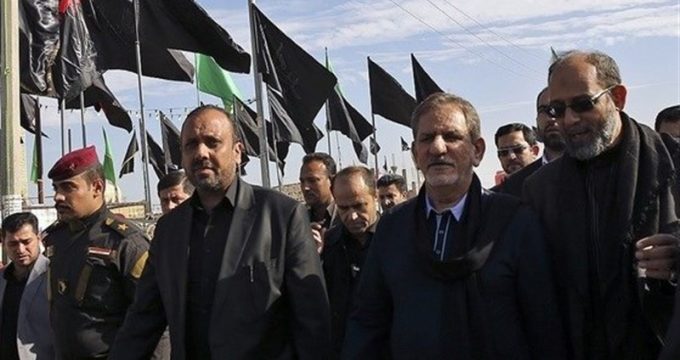 Veep: Arbaeen rituals turn to one of Islamic world symbols

IRNA – First Vice-President Eshaq Jahangiri, who is in Iraq to attend Arbaeen Rituals, said that it turns to one of Islamic world symbols.

He called the rituals an old tradition to maintain Ashura Movement, and added that it is being held every year more glorious than year before.

Jahangiri, who arrived in Najaf on Thursday morning, told reporters that the aim of his visit here is to pay respect to the 3rd Imam of Shia and also appreciating Iraqi government and people for hosting millions of Imam Hossein pilgrims.

‘Since past year, security, tranquility and number of participants in the rally have increased noticeably,’ he said, adding that more than 2 million Iranians passed the border points into Iraq, in addition to foreign citizens, who arrived here via Iran’s borders.

He added that managing such huge gathering is higher than ability and capacity of the governments and Arbaeen rituals is an unprecedented incident in the world, which such number of pilgrims enters a country in a short period of time.