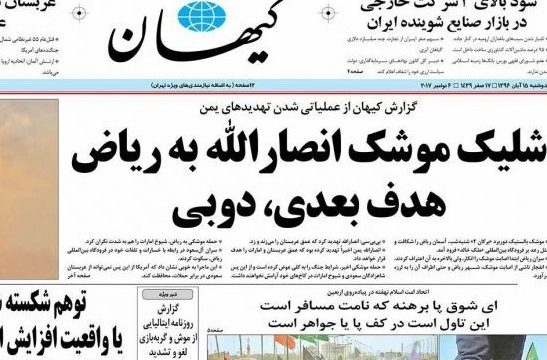 Al-Monitor- Almost immediately after Yemeni fighters launched a missile at Riyadh’s airport Nov. 4, Saudi officials and US President Donald Trump both pointed fingers at Iran, saying Tehran was behind the attack. In response, Iranian officials were quick to rebut the allegation.

On Nov. 5, Islamic Revolutionary Guards Corps (IRGC) commander Mohammad Ali Jafari said, “Shipping missiles to Yemen is not even possible and these missiles that are being launched belong to Yemen, which are rebuilt and have had their range increased to pursue revenge for the blood of their martyrs.”

Describing the Saudi accusations as “provocative,” Iranian Foreign Ministry spokesman Bahram Ghassemi said Nov. 5, “Our friendly advice to them is to put aside the false accusations and to stop the attacks on the innocent and defenseless Yemenis as soon as possible, and to pave the way for an intra-Yemeni dialogue and to bring peace in Yemen.”