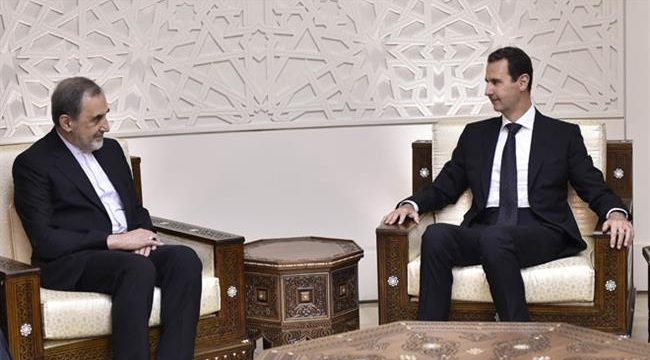 Syria war not to end after recapture of Dayr al-Zawr: Assad

Press TV – Syrian army soldiers and allied fighters will keep fighting terrorist groups in the country after the end of the battle in the eastern city of Dayr al-Zawr, President Bashar al-Assad says.

“The victories against terrorist organizations, which started in [the northwestern province of] Aleppo and will not end in Dayr al-Zawr, have foiled plans to partition the country and prevented terrorists from achieving their goals,” Assad said in a meeting with Ali Akbar Velayati, a senior advisor to Leader of the Islamic Revolution Ayatollah Seyyed Ali Khamenei, in Damascus on Tuesday.

The Syrian army and allied fighters managed to retake full control over city of Dayr al-Zawr on November 3 in their latest push against Daesh Takfiri terrorists.

Damascus began the liberation operation two months ago and broke Daesh’s three-year-long siege of the government-held part of the city in September. Army troops have in recent days stepped up their gains in the city, going neighborhood to neighborhood after the remaining terrorists.

The recapture of Dayr al-Zawr from Daesh is yet another key defeat for the Takfiri outfit, which has lost most of the territory it seized during its rapid advances across Syria and neighboring Iraq in 2014.

Elsewhere in his remarks, Assad said the Syrian forces would target those who sought to “divide and weaken [regional] states.”

He emphasized that the Syrian army and allied forces were not engaged merely in a fight against terrorism, but also against the attempts to invest in and exploit terrorism with the purpose of dismembering and debilitating regional countries.

Assad affirmed that the hostile measures taken by some regional and Western countries “will not dissuade Damascus and Tehran from continuing cooperation to bolster stability in the region and defend the interests of its people.”

The senior Iranian official, for his part, said the Syrian people’s resistance and sacrifices during seven years of war have played a key role in restoring security and political stability to the Arab country.

“Today, the enemies of the resistance front are at their weakest compared to the past,” Velayati added.

He emphasized that the recent victories achieved by Lebanon and Syria against Daesh terrorists heralded greater achievements for the resistance front.

Speaking to reporters following a meeting with Syrian Foreign Minister Walid al-Muallem in Damascus on Monday, Velayati said Iran and Syria had “fundamental” commonalities vis-à-vis the resistance front and shared the objective of safeguarding it in the Middle East.

“Iran and Syria aim to maintain the resistance front in the region and stand up against Zionism and its allies,” he said.

Velayati added that all-out cooperation between Tehran and Damascus had protected Syria in the face of foreign aggression.