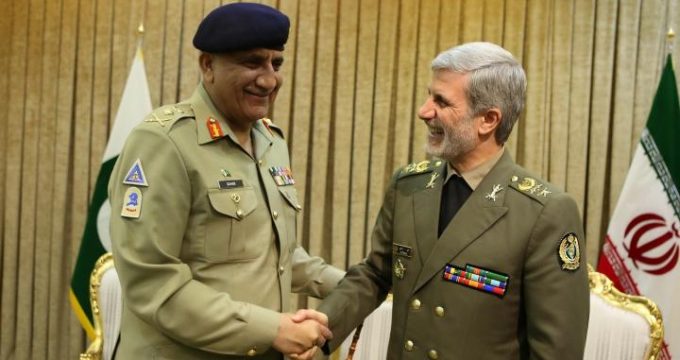 In a meeting with Bajwa, Iranian minister of defense declared that Tehran sees Islamabad’s security ‘as its own’, adding that “Respect for territorial integrity, solidarity and national sovereignty of the regional countries is among the fixed principles of the Iranian foreign policies” .

Meanwhile, Bajwa said in the present conditions the unity among Muslim countries is a necessity to restore peace and security.

Saying that fighting terrorism and restoring security in the border with Iran is a priority for Pakistan, he expressed hope that bilateral economic and commercial ties be expanded through establishing peace and security in the Iran-Pakistan borders.

In the meeting Commander Jafari said Islam is the most significant factor of unity between Iranian and Pakistani nations, adding that despite plots and hostilities of enemies against Islamic Ummah and regional states, relations between Iran and Pakistan have deepened further.

The Pak army commander, for his part,  voiced pleasure over his visit to Iran, and said, ‘The two Iranian and Pakistani nations, enjoy valuable and old civilization and history and this has led to more grounds for cooperation.’

Talking to Pakistani commander, Pakpour called referendum recently held in Iraqi Kurdistan Region as a Zionist plot and said that similar plots were also hatched for Iran and Pakistan due to their ethnic diversities.

Considering problems created by terrorist groups in the border areas, Bejwa, for his part said that the two countries have plenty of commonalties and underlined expansion of these commonalties.

The Pakistani chief of army staff is in Tehran at the head of a delegation of high-ranking military officials. He held talks with Iranian President Hassan Rouhani, Chairman of the Chiefs of Staff of the Iranian Armed Forces Major General Mohammad Baqeri and Foreign Minister Mohammad Javad Zarif on Monday.

Bajwa’s visit is focused on enhancing the level of defense and security interaction between the two countries and discussing other issues of mutual interest.