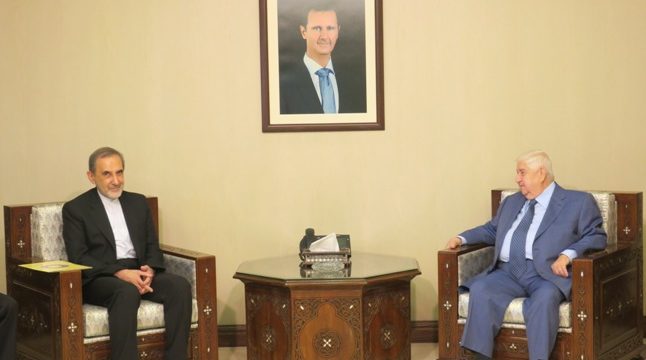 November 7, The Iran Project – At the end of his visit to Lebanon, Advisor to the Supreme Leader of Islamic Revolution for international affairs Ali Akbar Velayati arrived in Damascus on Sunday (Nov 5) to hold talks with Syrian officials.

In a meeting with Muallem, Velayati said Iran is standing by Syria in all fields such as fighting terrorism, congratulating over the recent victories of the Syrian Army against terrorist group Daesh in eastern Syria and the failure of the destructive plans designed by US, Zionist Regimes and their allies.

“Syria will continue fighting against terrorism till the end of this sinister phenomenon and return of peace and stability throughout the country,” he added.

Speaking to reporters, after his meeting with Muallem, Velayati said Iran and Syria are determined to maintain Resistance Front in the region through resisting against the Zionist regime and its allies.

Syrian foreign minister, for his part, told reporters that all-out consolidated and strategic relations between Syria and Iran are known to all.

Also, talking to reporters after a meeting with Khamis, Velayati added that Saudi Arabia is hatching a plot in every corner of the Arab or Islamic world each day, which will make the country isolated in the Muslim and Arab world.

Addressing the same gathering, Syrian deputy foreign minister Faysal al-Meqdad, also said that more attempts should be made to promote economic relations in line with the two countries’ interests.

“We have common enemies and we are standing by each other in the fight against terrorism and we are sure that we will emerge victorious together,” he said.

Resistance movement marks a new victory against the enemies and aggressors each day, al-Meqdadi said.