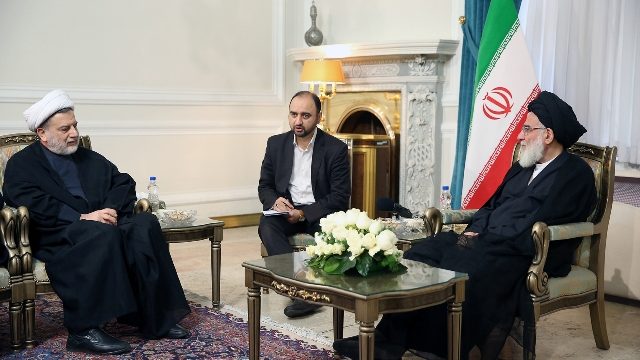 IRNA – Chairman of the Expediency Council Ayatollah Mahmoud Hashemi Shahroudi said on Saturday that the Iraqi nation and parliament should be watchful in dealing with the enemy’s influence.

Shahroudi made the remarks in a meeting with First Vice Speaker of Islamic Supreme Council of Iraq (ISCI) Humam Hamoudi.

Some foreign countries are striving to influence and leave impacts on the Iraqi people and parliament, he said while warning the Iraqi official to exercise vigilance in dealing with such developments.

During the meeting, Shahroudi called for the expansion of all-out relations and cooperation between the two countries and underlined the significant role of the Iraqi parliament in the country’s developments.

Shahroudi congratulated chairmanship of Hamoudi to him and Iraqi people and expressed hope that to witness a promising future for Iraq.

ISCI played a very significant role in the victory of Iraqi Muslim nation as well as in the governments coming to power after fall of Saddam Hussein which proves that the record of activities of ISCI is unprecedented, Aytollah Shahroudi said.

Recently, some Arab countries in the region try to influence Iraqi people and might be able to promote thoughts running counter to the goals of the ISCI and this requires vigilance of the Iraqi people, he said.

The US, Zionist regime and Al Saud spare no efforts to influence and distort realities in Iraq seeking to set a blow to Islam, Ayatollah Shahroudi added.

ISCI plays a very prominent role in bolstering unity among Islamic groups as it has won the respect of all people, he said.

The Iraqi envoy, for his part, said the news on the defeat of Daesh terrorist group in Iraq and Syria will be publicized very soon, and expressed the hope to take advantage of Iran’s experiences in the field.