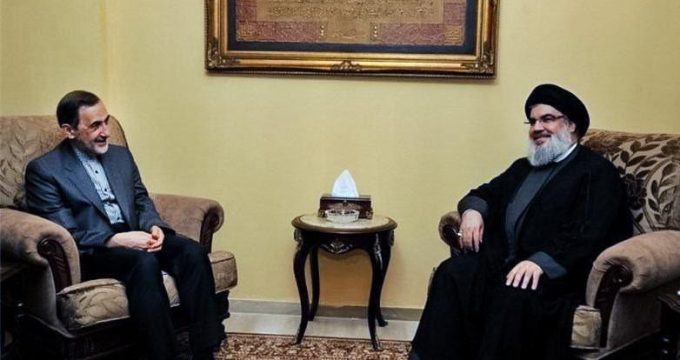 Talking to al-Hariri, Velayati said recent victories achieved by the Resistance Front were promising of complete collapse of Takfiri and terrorist groups and their supporters.

Al-Hariri also said “we are faced with serious challenges from extremist and Takfiri groups and victory can be achieved only through resistance and perseverance.”

Meanwhile, Velayati and Nasrallah discussed latest regional developments during a meeting on Friday.

At a joint meeting which lasted for about an hour, Velayati and Aoun discussed ways to expand bilateral cooperation and exchanged views on developments in the region, including the ones in Syria.

“Iran backs the diversity and plurality which exists in Lebanon and insists on success of the incumbent Lebanese government with all its diverse trends,” highlighted Velayati stressing that Iran was seeking to expand relations with Lebanon.

Aoun, for his part, highlighted Iran’s role in promoting stability and security in the region and emphasized the need to bolster ties between Tehran and Beirut.

After the meeting Velayati stated that the efforts by the US to divide Syria in the East of Euphrates were doomed to failure.

Addressing the second International Union of Resistance Scholars on Thursday in Beirut, Velayati reiterated that certain countries of the region were obsessed with normalization of relations with the Zionist regime.

The official said the opening ceremony of the meeting had been accompanied a message by Leader of Islamic Revolution, Ayatollah Seyyed Ali Khamenei, who called for continued fight against Israel, adding “the issue reveals the great importance attached to the Palestinian issue by Iran’s Leader.”