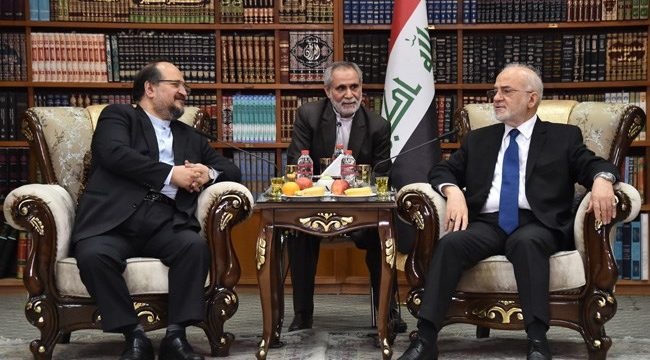 Rudaw – Tehran and Baghdad are ready to strengthen economic ties as Iraq transitions into a reconstruction and rebuilding phase after the military defeat of ISIS.

Jaafari thanked Shariatmadari for Iran’s support “in international forums and its war” against ISIS, while noting Iraq “is keen to establish the best relations with all neighboring countries, especially Iran.”

The Iraqi FM also wants to “increase the volume of trade between Baghdad and Tehran.”

“Today’s relations between the countries are based on common interests,” read an Iraqi FM readout of the meeting.

The two met in the Iraqi capital on Friday, the same day Iraqi forces announced they had taken control of the town of al-Qaim on the border with Syria in their latest victory of ISIS.

The Iranian also met with officials of Iraq’s Central Bank.

“He pointed to obstacles on the way of improvement of banking relations between Tehran and Baghdad,” IRNA reported.

Jaafari thanked Shariatmadari for Iran’s support “and highlighted the importance of elevation of trade ties between the two capitals,” according to the IRNA report.

The two discussed “recent developments” in the Kurdistan Region and “hoped for normalization of the situation in that region.”

Iran shut down border crossings with the Kurdistan Region in October as the Iraqi military moved to impose federal control disputed areas, borders, and international points of entry. It has since reopened some of the crossings after talks with Kurdish officials.