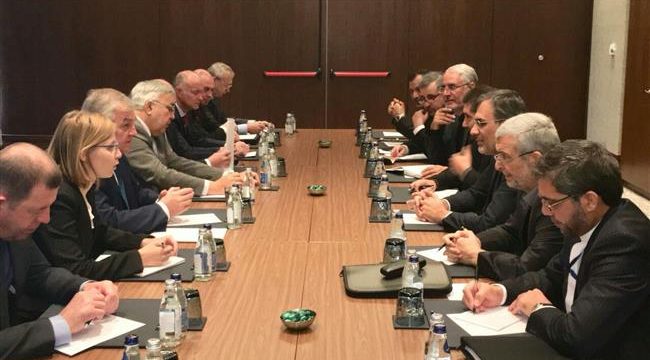 Astana peace process for Syria at a glance

November 4, The Iran Project – The seventh round of Syria peace talks (held on 30-31 Oct.) brokered by Iran, Russia, and Turkey wrapped up in Kazakhstan’s capital of Astana in what is referred to as the Astana peace process for Syria.

Delegations from the Syrian government and armed opposition groups as well as the three guarantor states were present at the talks. So were representatives from the United Nations, Jordan, and the United States, according to reports.

Hossein Jaberi Ansari, Alexander Lavrentiev and Sedat Onal headed Iran, Russia and Turkey’s delegations in this round of talks.

Syrian government delegation as well as opposition groups, the UN, the US and Jordan representatives as observers also attended Syrian peace talks.

Another peace process for Syria has been ongoing under the auspices of the UN. Known as the Geneva peace process, it has achieved little in comparison with the Astana process, which began just this year and has already cultivated in the establishment of four deescalation zones which are expected to ease the conflict now in its seventh year.

While the seventh round of negotiations failed to reach an agreement on the two key points regarding the demining and exchange of detainees, the three guarantor states have issued a joint statement which includes agreement on convening a Congress of Syrian National Dialogue as an initiative of Russia.

Some details of Astana gathering is as follows:

The Islamic Republic of Iran, the Russian Federation and the Republic of Turkey as guarantors of the observance of the ceasefire regime in the Syrian Arab Republic:

– welcoming progress in the implementation of the Memorandum on the creation of de-escalation areas in the Syrian Arab Republic of 4 May 2017 during the past six months;

– reaffirming their strong commitment to the sovereignty, independence, unity and territorial integrity of the Syrian Arab Republic;

– emphasizing the significant reduction of violence on the ground in Syria as a result of measures taken to strengthen and maintain the ceasefire regime, including launching the de-escalation areas and creating the security zones:

In the gathering, Lavrentyev, urged opposition groups to “participate and present their positions” in the meeting that he said would touch on constitutional reform.

“We want to emphasize that this event should be part of the international community’s efforts to find effective mechanisms for political settlement,” Lavrentyev said.

But representatives of the Syrian opposition in Astana cast doubt on the plan.

Representatives of other opposition groups who had said from the beginning they wouldn’t attend the congress if it were held in Latakia, Syria, weren’t happy with the new venue, either. Mohammad Alloush, a member of the opposition’s High Negotiations Committee and a senior official with Jaish al-Islam, said the congress amounts to a meeting “between the regime and the regime.

Meanwhile, Head of Iran’s delegation in Syria Peace Talks said that in a meeting with Syrian delegation, they called for probing the instances of violating Astana Agreement, which will be proposed in the presence of peace guarantor countries.

After holding bilateral related meetings with Syrian and Russian delegation in Astana, deputy foreign minister for Arab-Africa affairs said that in the meeting with Syrian delegation headed by Bashar al-Jafari the two sides discussed trilateral meeting agenda and the latest field developments in Syria and issues related to former agreements on Idlib.

Syrian peace talks began in January 2017 and since past 10 months it held meetings seven times, which had positive results in the field of ceasefire and decreasing tensions in the crowded area of Syria.

Guarantors of a nationwide Syrian ceasefire regime – Russia, Turkey and Iran – had agreed on May 4 in the Kazakh capital, Astana, to establish “de-escalation zones” in war-torn Syria. The zones would cover the city of Idlib and certain parts of Latakia, Homs, Aleppo and Hama as well as Damascus, Eastern Ghouta, Daraa and Quneitra. The establishment of the fourth one in Idlib province was the spotlight of the sixth meeting in Astana.

De-escalation zones in Syria allowed to significantly reduce the scale of the conflict and contributed to the improvement of the humanitarian situation in Syria.

Syria has been locked in civil war since March 2011. According to UN’s special envoy for Syria, Staffan de Mistura, around 400,000 people have died in the conflict while half the population has been driven from their homes.

Without doubt, the Astana talks is a process which will continue until return of stability as well as establishment of sustainable peace in Syria.

For sure, the ‘consensus among the Astana talks’ guarantors’ would lead to restoration of peace to the war-torn country.