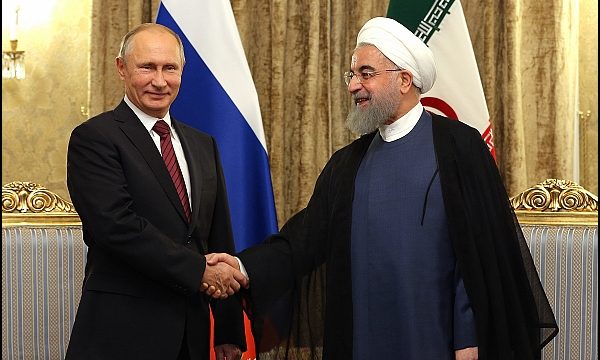 Russia takes on Mideast diplomacy as US retreats

AP| Zeina Karam: After watching for years as the United States called the shots in the region, Russian President Vladimir Putin is seizing the reins of diplomacy in the Middle East, establishing footholds and striking alliances with unlikely partners.

From the battlefields of Syria to its burgeoning relationships with Iran and Turkey to its deepening ties with Saudi Arabia, Russia is stepping in to fill a void left by the United States first under the Obama administration and now in the vastly inconsistent and largely hands-off policies of Donald Trump.

Embroiled in controversy at home and loath to engaging in the strife-riddled region beyond fighting the Islamic State group, Trump has largely stayed on the sidelines of attempts to help find a political settlement for Syria’s long-running civil war. Those efforts are now led by Russia, in partnership with Iran and Turkey, organizing local cease-fires and creating “de-escalation zones” that have significantly reduced the violence in the country. Russia’s role in Syria has raised its international profile and allowed it to claim fighting terrorist groups such as the Islamic State group while it shored up President Bashar Assad’s government.

Moscow has stood by Tehran while Trump has refused to re-certify the nuclear deal between Iran and world powers — a stance reiterated by Putin himself Thursday on a visit to Tehran. It has also reached out to Iran’s Mideast rival Saudi Arabia in recent weeks, promising weapons deals and other investments to the Sunni power house.

Bilal Saab, a senior fellow and director of the Defense and Security Program at the Middle East Institute, said that while Russia has clearly become a more influential interlocutor on Syria, there are clear limits to its overall foray into the region.

“What Russia offers is transactional, as opposed to strategic. Arms sales are no substitute for deep political rapport, which is what Washington provides, despite lingering tensions with key partners,” he said.

Still, Putin appears to be positioning himself as Mideast broker, seeking to expand his influence in a region where the U.S. remains the most dominant military actor.

Moscow’s military involvement in the Syrian war since 2015 has propped up Assad’s forces and turned the conflict in his favor, while Russian mediation earlier this year launched cease-fire talks in Astana, Kazakhstan. The talks, sponsored jointly with Iran and Turkey, have brokered local deals that have significantly reduced violence in the war-torn country.

This week, Russia announced plans to host Syrian groups and government representatives for political talks on Nov. 18 — just 10 days before a new round of U.N.-sponsored talks are to start in Geneva. The invitation has roiled Syrian opposition groups who described it as an attempt to “bypass” U.N. efforts to resolve the country’s conflict and dictate the terms of any settlement.

Russia invited over a dozen groups, a mix of government representatives and political opposition parties, including for the first time the main U.S.-backed Kurdish party now in control of northern Syria. The Syrian Kurdish PYD has previously been barred from participation in political negotiations at the Geneva Talks, at Turkey’s insistence.

The invitation by Russia has led to speculation that Russia may use the conference to broker a wider reconciliation between Assad and the Syrian Kurds under conditions that preclude long-term U.S. influence in Syria.

“Russia is accelerating its effort to subvert the Syrian political process by establishing a new diplomatic framework that sets conditions to expel the U.S. from Northern Syria,” said an analysis by the Institute for the Study of War this week.

Badran Ciya Kurd, an adviser for the Kurdish-led self-administration who met with Russian officials ahead of the invite to Sochi, said Russia supports the Kurdish federal project while the U.S. strategy has been vague.

“It is not yet clear what their (Americans) strategy is after Raqqa, and we would like to understand,” he said, referring to the northern city liberated from Raqqa last month.

While Iran promised a foreign policy that would be “neither East nor West” after its 1979 Islamic Revolution, Tehran has tilted toward Russia given its antipathy for Washington. Tehran relied on Moscow’s support to complete its Bushehr nuclear power plant in 2011 and received Russia’s S-300 surface-to-air missile system in 2016.

In that time, Russia and Iran also found themselves fighting to support the embattled Syrian president. The countries regularly coordinate on Syria and have provided overwhelming military and political aid to prop up Assad’s government and army.

On a visit to Tehran on Wednesday, Putin strongly backed Iran and its nuclear deal with world powers, saying Moscow opposed “any unilateral change” to the accord after Trump refused to re-certify it.

Putin made the comments on a one-day trip to Tehran for trilateral talks between Azerbaijan, Iran and Russia, during which he met with both Iranian President Hassan Rouhani and Supreme Leader Ayatollah Ali Khamenei.

Across the Gulf Arab states, the U.S. has been the guarantor of security since the 1991 Gulf War. In recent years, however, Gulf countries have increasingly looked toward making defense deals with Russia, especially after growing wary of the U.S. detente with Iran under President Barack Obama. In the last weeks alone, Russia has gone big into Saudi Arabia, which supported the Afghan mujahedeen against Soviet troops in the 1980s.

King Salman of Saudi Arabia visited Moscow last month and signed multibillion-dollar energy deals with Russia, which also agreed to sell the Iranian rival its advanced S-400 missile system, which Tehran does not possess. Other deals would include Saudi Arabia locally producing Russian anti-tank missiles, rocket launchers and automatic grenade launchers, as well as the latest version of the Kalashnikov assault rifle.

King Salman’s visit marked the first by any Saudi monarch to Moscow and heralded a new era of cooperation and a thawing in a bilateral relation that has been severely strained since Russia’s military intervention in Syria on behalf of Assad.

Israel and Russia maintain a close, if sometimes uneasy, relationship on regional issues — particularly when it comes to the war in neighboring Syria. In recent years, the Israeli and Russian air forces have been active in Syrian skies and have maintained, throughout the fighting, a hotline to prevent clashes between their air forces. Israel’s prime minister, Benjamin Netanyahu, has also held a number of meetings and phone conversations with Russian President Vladimir Putin, to discuss the situation in Syria.

Still, Israeli officials are concerned about Russia’s cooperation with Iran. But they also believe that Russian and Iranian interests could diverge as both countries compete for lucrative reconstruction contracts and political influence in postwar Syria. Israeli officials believe that Russia considers Iran a potentially destabilizing force in postwar Syria, and are cautiously optimistic that Russia understands Israel’s security concerns.

“Russian and Israeli interests in Syria may not be the same but that doesn’t necessarily mean that Russia cannot play a constructive role in Syria in Israel’s view or that certain understandings can’t be reached between Russia and Israel with regard to Syria,” said Chagai Tzuriel, the director general of Israel’s Intelligence Ministry.