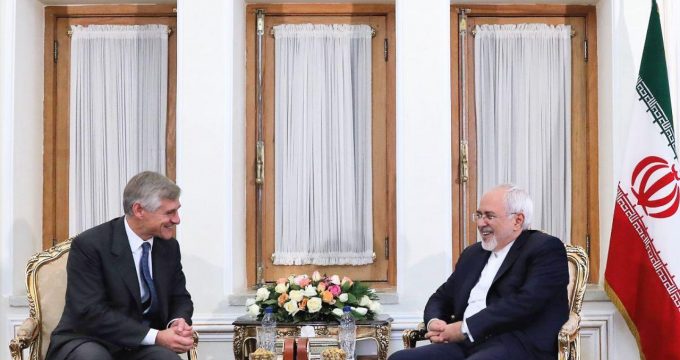 ‘continued and full implementation of Vienna Nuclear Agreement by all sides (is) crucial,’ Michael Linhart wrote on his twitter account on Thursday while commenting on his meeting with the Iranian Foreign Minister Mohammad Javad Zarif on November 5 during the former’s visit to Iran.

Linhart, who wrapped up visit to Iran on Thursday afternoon, added in his twitter message that he has invited President Hassan Rouhani to visit Austria.

President Rouhani is to pay a visit to Vienna in the near future, he added.

No Iranian official has commented on the President Rouhani’s visit to Austria yet.

The Austrian deputy foreign minister also referred to his trip to the ancient city of Isfahan in central Iran where he met with provincial Governor-General Rasoul Zargarpour.

There are ‘great potentials for deepening cooperation with Iran (in the fields of) business, investment, tourism and culture,’ Linhart said.

He also met with bishop of Orthodox Armenian Church in Isfahan and exchanged views on issues of religious minorities in Iran.

The Austrian official said that he has held good talks with Iranian Deputy Foreign Minister Majid Takht-e Ravanchi on bilateral, regional and human rights issues and noted that Iran is an important partner for Austria in the region.

Linhart said that he has discussed bilateral and regional issues with Head of Iranian Parliament National Security and Foreign Policy Commission Alaeddin Boroujerdi.