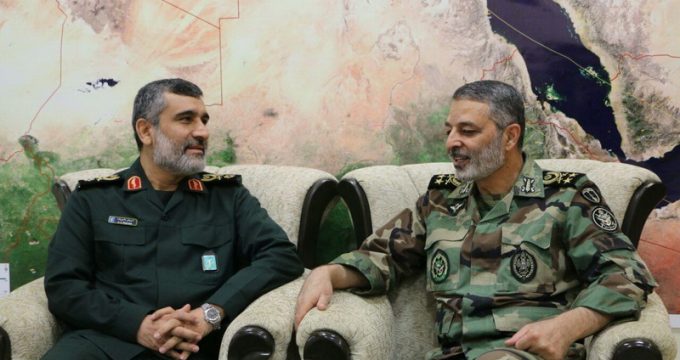 IRNA – Commander of the Aerospace Force of the Islamic Revolution Guards Corps (IRGC) and the chief commander of Iran’s Army during their meeting stressed that the US sanctions on Iran won’t affect the country’s enhancement of its missile power.

Brigadier General Amir-Ali Hajizadeh and Major General Abdolrahim Mousavi said in their meeting on Wednesday that the goal of the new sanctions on the IRGC is to create a rift between the Army, IRGC, people and government in Iran.

Enemies of the Islamic Revolution and the Iranian people are trying to target the IRGC, which is the main reason behind the failure of US plans in the west of Asia, they said.

To achieve their ends, the enemies are trying to promote Iranophobia, and to replace terrorism with anti-terrorism, and Daesh (ISIS) with anti-Daesh, they said.

The two high-ranking commanders also said the power yielded by the Iranian armed forces is rooted in their abidance by the orders of the country’s Supreme Leader Seyyed Ali Khamenei.

They stressed that Iranian armed forces will safeguard the security, peace and interest of the Iranian people in the same way they did during the eight-year Iraq-Iran War, through cooperation and synergy.