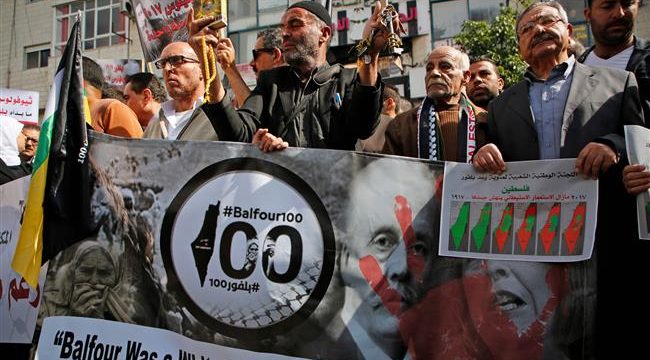 Press TV – Hundreds of Palestinian demonstrators have poured onto the streets of the West Bank city of Ramallah to hold a protest rally on the 100th anniversary of Britain’s Balfour Declaration, which led to Israel’s creation.

Holding banners and some waving black flags, angry protesters marched from Ramallah’s Arafat Square to a nearby British cultural office to denounce the notorious declaration and call for Palestinian refugees to be allowed the right to return.

“Balfour promised to establish the Israeli entity and its result is everything the Palestinian people still suffer from today, such as displacement, destruction and pain,” 70-year-old Abu Haitham Amro said.

The protesters also held signs that read, “The promise of he who doesn’t own to those who don’t deserve,” a common expression in Arabic for the Balfour Declaration.

“Balfour was a white supremacist, his legacy is apartheid,” another banner read.

A few thousand protesters also gathered in Gaza where more than 3,000 people took part in a protest rally from a square in Gaza City to the local United Nations headquarters.

Demonstrations were also held in the southern West Bank city of Hebron, in which protesters burned a British flag.

A large group of Palestinians also protested outside the British consulate in Jerusalem where they briefly clashed with Israeli police.

In West Bank city of Nablus, demonstrators chanted “O the English colonizers, we want an apology from you.”

According to AFP, Some protesters held black flags calling for Palestinian refugees to be allowed the right to return, as they marched from Ramallah’s Arafat Square to a nearby British cultural office.

The massive protest rally comes as several Palestinian leaders have called on Britain to apologize for the declaration, which said it viewed “with favor the establishment in Palestine of a national home for the Jewish people,” but led to the creation of an occupying regime.

Palestinian President Mahmoud Abbas used the occasion to denounce the declaration, writing in a newspaper opinion piece that “the creation of a homeland for one people resulted in the dispossession and continuing persecution of another.”

“We have endorsed the two-state solution for the past 30 years; a solution that becomes increasingly impossible with every passing day,” Abbas wrote in Britain’s Guardian newspaper.

“As long as Israel continues to be celebrated and rewarded, rather than held accountable to universal standards for its continued violations of international law, it will have no incentive to end the occupation,” he added, referring in particular to Israel’s settlement expansion.

The Balfour Declaration was a public statement issued by the UK government during World War I, announcing support for the creation of Israel.

The declaration was named after Lord Arthur Balfour, the then British foreign secretary who penned the document, which will turn 100 next month.

Palestinians view the declaration as a prelude to the Israeli occupation of their homeland in 1948, saying the UK government should apologize for issuing the document.

The war leading to Israel’s creation also caused some 750,000 Palestinians either to flee or being expelled from their homes in what they call the “Nakba” or catastrophe.

Emboldened by the Balfour Declaration and the ensuing Western support, Israel captured huge swathes of Arab land in a war in 1948, and then proclaimed its existence.

In 1967, it proceeded to capture more Palestinian territory in another war. It then started propping up scores of settlements across that occupied territory in a move to gradually annex it.

Tel Aviv has defied all international condemnations of its settlement activities, including outright denunciation by the United Nations.