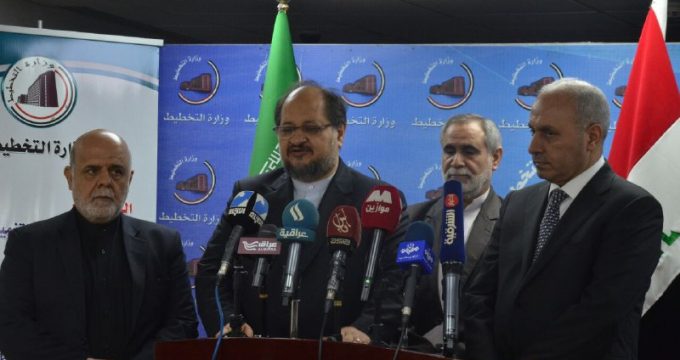 IRNA – Iranian Minister of Industry, Mine and Trade Mohammad Shariatmadari said on Thursday said that Iran will stand alongside Iraq to help reconstruct the country.

In a joint press conference with Iraqi Minister of Planning and caretaker of the country’s Ministry of Trade Salman al-Jumaili in Baghdad, Shariatmadari said that the two neighboring countries need to enhance their ties and that Tehran will help the Iraqi people and government to reconstruct the country.

The Iraqi minister, for his part, called on the Iranian companies to cooperate in reconstructing Iraq and finance the country’s reconstruction projects.

The two ministers met on Thursday to discuss expansion of economic cooperation between the two nations and remove barriers to further activating business cooperation in both countries.

The current volume of trade exchanges between Iran and Iraq is not satisfactory, Shariatmadari said.

Recent figures indicate that the volume of trade exchanges between Iran and Iraq over the past year stood at about eight billion dollars, he added.

Iran’s Minister of Industry, Mine and Trade, heading a delegation, arrived in Baghdad on Wednesday evening to explore ways of further expanding bilateral economic ties between Iran and Iraq.