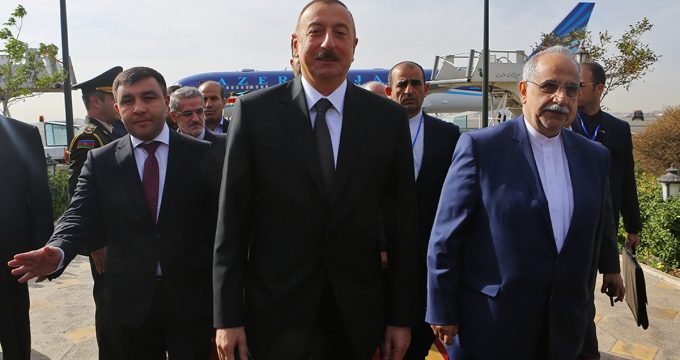 During his stay  in Tehran, Aliyev held talks with his Iranian counterpart  Supreme Leader of the Islamic Revolution Ayatollah Seyyed Ali Khamenei and President Hassan Rouhani, as well.

In a meeting with Azeri president, Iran’s Supreme Leader said that although Iran and Azerbaijan enjoy close and brotherly relations, the two countries should be aware of their enemies and foil their destructive plots.

Ayatollah Khamenei called for double efforts to deepen cooperation in different fields while referring to deep-rooted bonds between the two countries.

Talking to Aliyev, President Rouhani stated that the top Iranian and Azeri officials are determined to fully broaden bilateral ties.

“The trade and economic ties between Iran and Azerbaijan have made good progress and we should make more efforts to further tap into the two countries’ potential to meet the demands of the two sides,” President Rouhani said.

He specifically called for further cooperation in the banking, transportation, agriculture, energy, and oil and gas sectors.

Rouhani said the joint project of the Rasht-Astara railway as part of the International North-South Transport Corridor (INSTC) could play an important role in developing transit ties between the two countries.

Azeri president, for his part, thanked the hospitality of the Islamic Republic of Iran in setting up trilateral meeting between heads of Iran, Russia and Azerbaijan and said talks and exchange of views between the countries high-ranking officials for expansion of relations and cooperation will be underway.

Expansion of cooperation between Iran, Russia and Azerbaijan in transportation and North-South corridor will help broaden scope of such cooperation, Azeri president said.

Following the meeting, the three leaders issued a joint statement stressing that all parties to Iran’s nuclear deal, should adhere to their commitments and that the agreement is “working effectively.”

The first round of talks between President Rouhani, Russian President Vladimir Putin and Aliyev was held in Baku in August 2016.