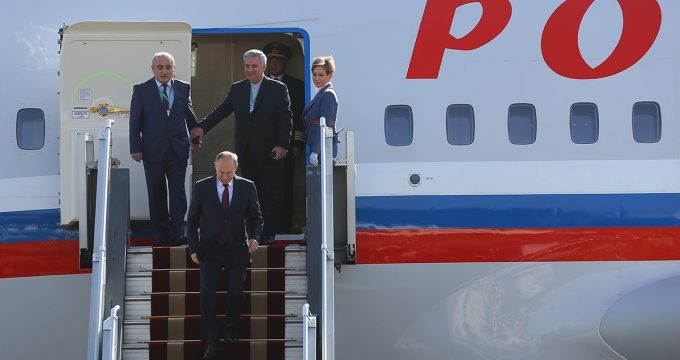 Putin arrives in Iran for talks with Tehran, Azerbaijan

Russian President Vladimir Putin has arrived in Iran for trilateral talks with Tehran and Azerbaijan.

In a message forwarded to the head of Islamic Resistance Ulema Union, Leader of Islamic Revolution Seyed Ali Khamenei stressed the prolongation of fight against the oppressive Zionist regime.

President of the Islamic Republic of Iran described relations between Tehran and Baku developing, especially in recent years, and emphasised the historical bonds and common religious interests of both countries, saying: “Attempting to develop ties and bonds between the two nations will never be enough when the level history of the interests of the two nations is concerned”.

US Treasury expands sanctions against IRGC

The US Treasury Department on Tuesday announced the expansion of sanctions on Iran’s Islamic Revolution Guards Corps, which were imposed on October 13.

Iran’s envoy to the United Nations expressed concern on Tuesday over the alarming level of violations against children in 2016, saying that they have been subject to various forms of violence by the terror groups.

US bad intention is the biggest obstacle on implementation of the July 2015 nuclear deal between Iran and the world powers, a senior Iranian diplomat said here on Wednesday.

The State Department confirmed Tuesday that Iran declined a special high-level meeting with the Trump administration during the United Nations General Assembly.

The Islamic Republic of Iran Air Force (IRIAF) started the second and last day of its drills in the central province of Isfahan on Wednesday morning.

Russia to help US to get back to reality – Moscow

The Russian deputy foreign minister has commented on the latest US sanctions against Iran’s Revolutionary Guards, Moscow’s relations with Washington.