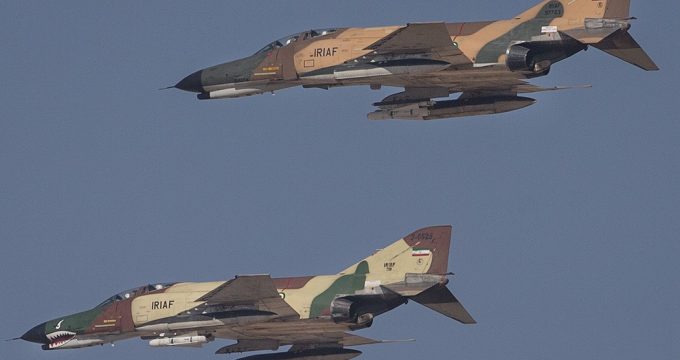 Tasnim – The Islamic Republic of Iran Air Force (IRIAF) staged the last day of its large-scale aerial drills in the central province of Isfahan after reaching all objectives set for the war game.

“We have reached all the pre-set objectives,” General Massoud Roozkhosh, the spokesman for the war game, code-named Aerial Power of Fadaeeyan-e Harim-e Velayat 7 (Devotees of Velayat Airspace 7), said on Wednesday.

He also announced the end of the operational stage of the war game and said the IRIAF managed to successfully test-fire all domestically made missiles, bombs and weapons during the aerial exercises.

In the second and last day of the war game, the IRIAF’s fighter-bombers, including Sukhoi Su-24 and F-4, destroyed their stationary and moving targets.

On Tuesday, General Roozkhosh had said that various defense systems and weapons developed or upgraded by the country’s academic and industrial centers and the Ministry of Defense were going to be showcased during the two-day drills.

Different kinds of domestically made missiles and bombs, including smart heavy and semi-heavy bombs as well as laser and radar-guided missiles, would be used in the war game, he said yesterday.