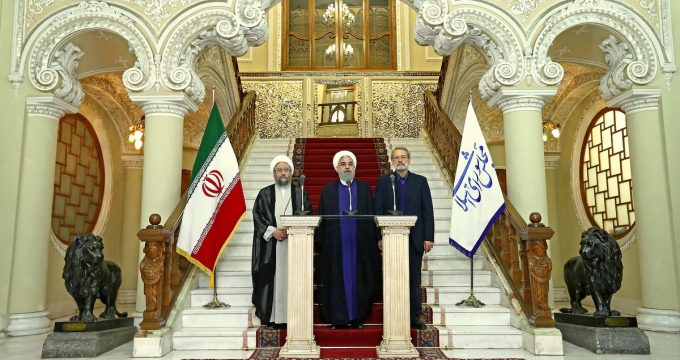 Tasnim – Iran’s President Hassan Rouhani, Parliament Speaker Ali Larijani, and Judiciary Chief Ayatollah Sadeq Amoli Larijani discussed the latest domestic and international developments in a meeting in Tehran, and weigh up plans to facilitate the process of investment in the country.

The heads of the three Iranian branches of power met at the Parliament building on Monday evening for talks about various issues.

Speaking to reporters after the gathering, President Rouhani said they have discussed the ways to boost unity and solidarity among the three branches.

As regards the 2015 nuclear deal with world powers, the president said the US is pursuing a plot, which is to disappoint the Iranian nation’s hopes and to throw doubt about the future of economy and Iran’s progress.

In the meeting, “good decisions have been made to better attract investment, particularly by the Iranian entrepreneurs abroad,” the president added, saying all investors and entrepreneurs should be able to enjoy the economic opportunities in Iran.

He also touched on the negotiations about the regional developments, saying the three branches of power share views on the approaches to settle the regional conflicts.

President Rouhani also noted that they have decided to hold such trilateral meetings more frequently on Leader of the Islamic Revolution Ayatollah Seyed Ali Khamenei’s advice.