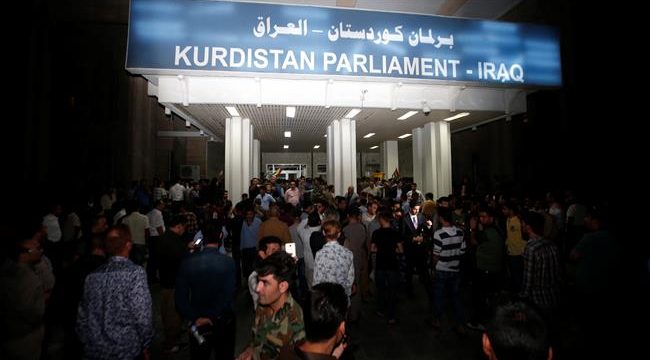 Press TV – Angry demonstrators, some carrying clubs, have reportedly stormed the parliament of the Iraqi Kurdistan Region in the region’s capital city of Erbil as the Kurdish lawmakers approved a request by president of the Kurdistan Regional Government, Massoud Barzani, to step down early next month.

According to witnesses, protesters were angry at Barzani’s decision to resign from the presidency of the region.

Some reports indicated that gunshots were heard as protesters, who claimed they were Peshmerga Kurdish fighters forced their way into the parliament building.

Other reports noted that Kurdish lawmakers were trapped inside their offices at the parliament building.

Angry demonstrators also attacked the crew of NRT news channel, who were reporting in front of the parliament. NRT is known to be very critical of Barzani and his policies.

Local sources say the gunfire heard during the incident was caused by security forces shooting in the air in order to disperse angry protesters.

The protest took place after Barzani told a closed-door session of the region’s parliament of his decision to step down amid the fallout from Iraqi Kurdistan Region’s independence referendum.

“After November 1, I will no longer exercise my functions, and I reject any extension of my mandate,” the 71-year-old Kurdish leader said in a letter read out to parliament, AFP reported.

According to a report by Kurdistan 24 news channel, the region’s parliament approved Barzani’s request to step down during its Sunday session.

Barzani has been the president of the KRG since 2005. However, he has been under fire by his critics, as his tenure officially expired in August 2015.

Last week, parliament decided “to freeze the activities” of Barzani, his vice-president, Kosrat Rasul, and the head of the presidential cabinet, Fuad Hussein.

On October 22, the main opposition party of Iraq’s Kurdistan region called on Barzani to quit, urging the formation of a national salvation government.

In defiance of Iraq’s stiff opposition, the Kurdistan Regional Government (KRG) held a non-binding referendum on September 25 on secession from the central government in Baghdad, which slammed the vote as unconstitutional.

The Iraqi government responded to the referendum by taking a number of punitive measures, including a campaign to seize back positions held by Kurdish forces since 2014, when they joined the fight against Daesh terrorists.

Under criticism from Iraq and the entire international community, the Kurdish leadership has now offered to suspend the results of the vote and engage in dialog with the central government, but Baghdad wants the results to be fully canceled.